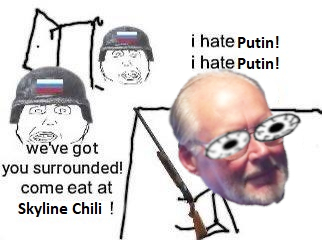 Starting with the recent hubbub in Ukraine, there’s been various opinions among online dissidents. For one sect of the online right, NATO and Azov have become their team of choice. American Futurist and James Mason have been towing the CIA / NATO line.

You would expect this from neocons, or Groypers, but this time it’s American Futurist, James Mason’s official outlet, leading the charge. With a propaganda campaign that’d put Goebbels to shame, Mason’s outlet was posting Ukrainian state propaganda as early as January. This lines up perfectly when the war effort began to really heat up just as the Beijing Olympics starting escalated the situation. 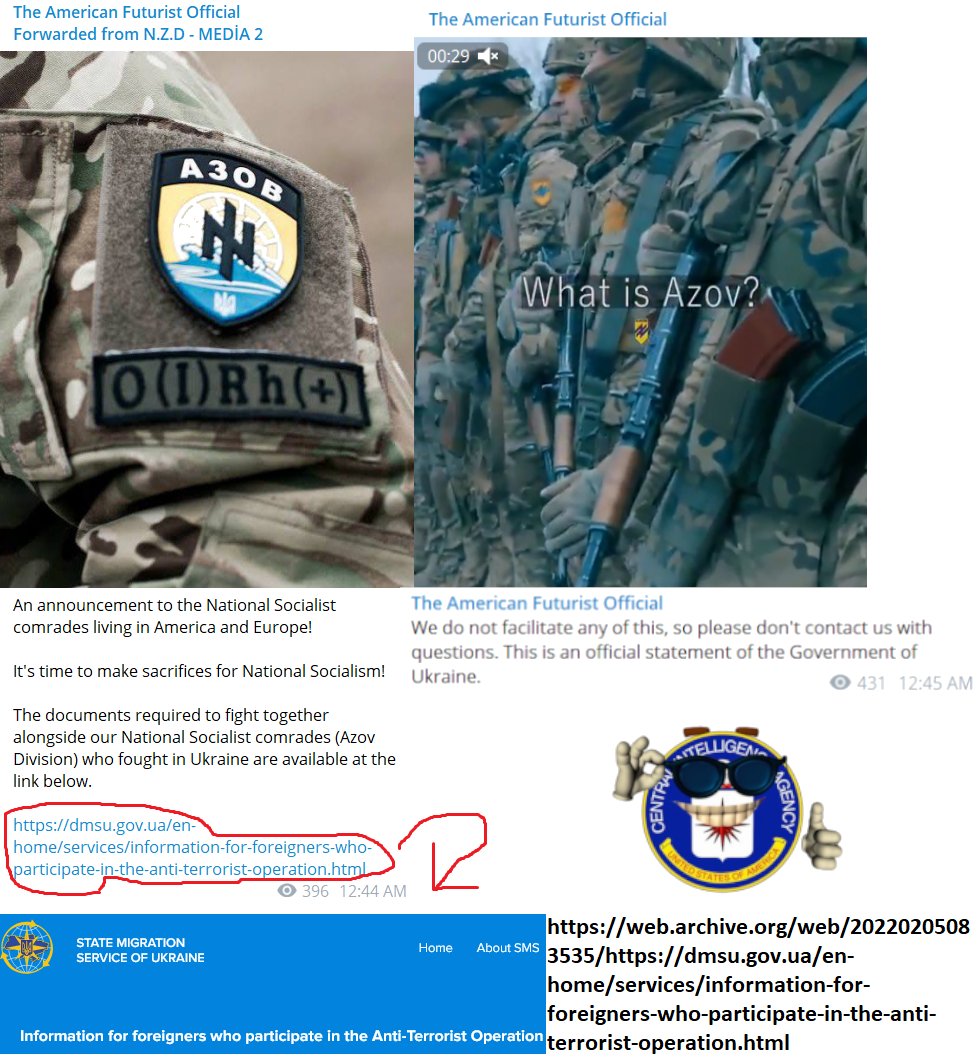 Imagine for a second if TRS linked to Russia’s army recruitment page like this, Dugin would be rolling in his future grave!

Most disturbingly, before American Futurist posted state propaganda, they posted a link to join the Ukrainian military. That’s right, James Mason and Drill Sgt. Grey need you to die for ZOG! Regardless of Russia vs Ukraine, no normal person supporting either side should be advocating for dissidents to join any military. In fact, American Futurist claimed “This is an official statement of the Government of Ukraine” indicating some level of cooperation. American Futurist was supporting Ukraine as a whole, the link posted going to the migration page to join the Ukrainian Military. 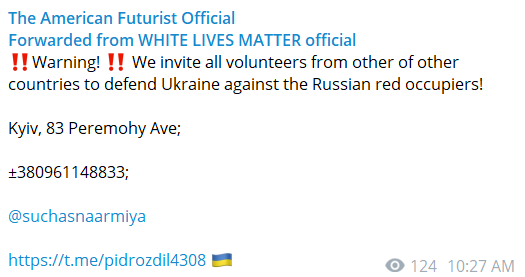 To clarify, 69 year old James Mason doesn’t run either his American Futurist outlet, telegram or gab. However, the excuse given by willing yuppies that somehow Mason is unaware just doesn’t hold up. Although the Mason interviews are now gone, he has repeatedly expressed his approval of the Azov Battalion. If Mason is simply unaware of the Azov Battalion glow, that directly implies American Futurist is out of its element. At best, James Mason seems complicit in American Futurist’s pro-NATO stance, and at worst quietly backing US global hegemony.

Just as insane, America Futurist and its proxies are advocating donating to the Ukrainian army via the Ukrainian bank. What this means is giving your bank info, your name and all your personal info to a CIA front. Not only do you need to travel to Ukraine to die for ZOG, you must also pay to keep the jewish oligarch in power. Based and totally not a honeypot! 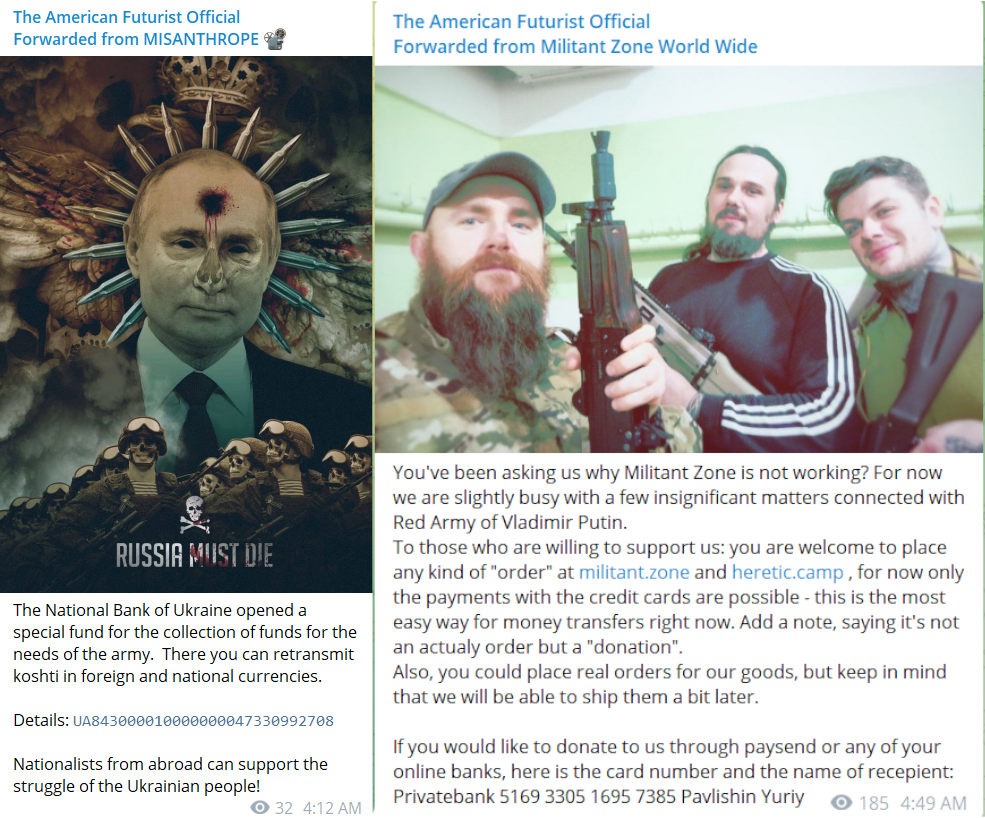 Oy vey goy, stop building up that wealth! Why don’t you invest on White brother wars?

Eventually, American Futurist became aware of the overt glow inherent in encouraging dissidents to join a United States backed military, so they pulled a sleight of hand. From here, American Futurist would attempt to straddle this line by denouncing Ukraine, “only” supporting Azov. The problem is that supporting Azov but not Ukraine is akin to supporting the SS, but not Nazis. This is in total opposition to their previous position of openly promoting Ukraine. The problem is that Azov works openly with Western intelligence agencies and proudly shills NATO, so no thanks! 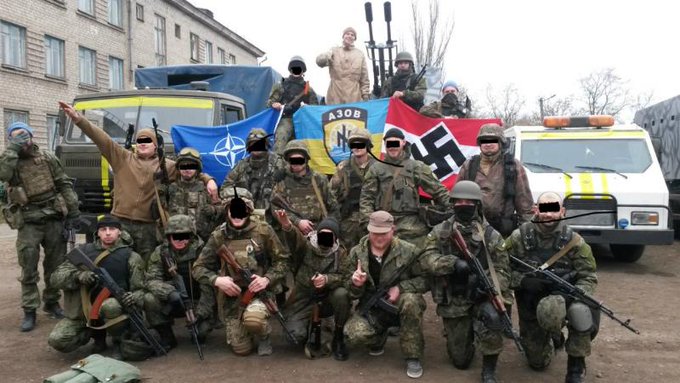 NATO and Azov are brothers of US imperialism 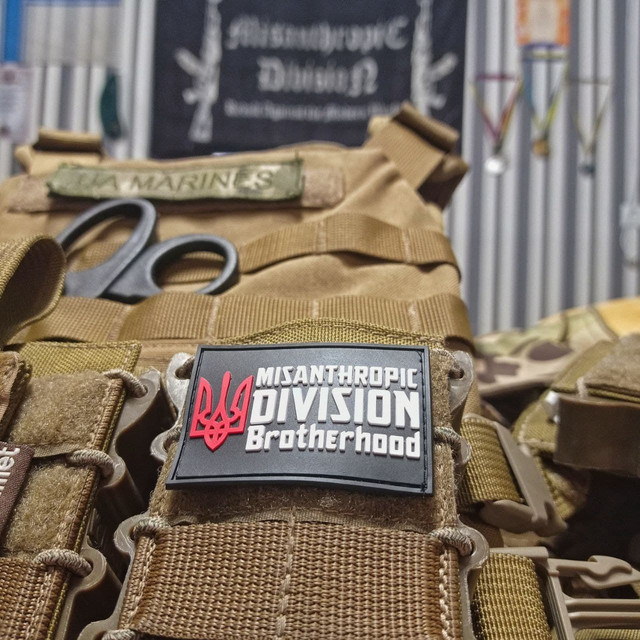 There’s a coalition of specific telegrams all pushing this pro-NATO coordinated message at once, sharing each other’s content. WLM “818”  (Editors note: @whitelivesmatter818 holds pro NATO views while @whitelivesmatterofficial is more neutral. They are 2 different groups.)  being the largest with 10k followers, others being Misanthrope, Militant Zone World Wide, and Runic Storm. Runic Storm is a clothes store ran by a soldier in the Azov Battalion. They are openly begging dissidents to work for a NATO backed group and talk to a foreign agent. This fits into American Futurist’s apparent goal “tricking” the US government into letting dissidents die for ZOG. 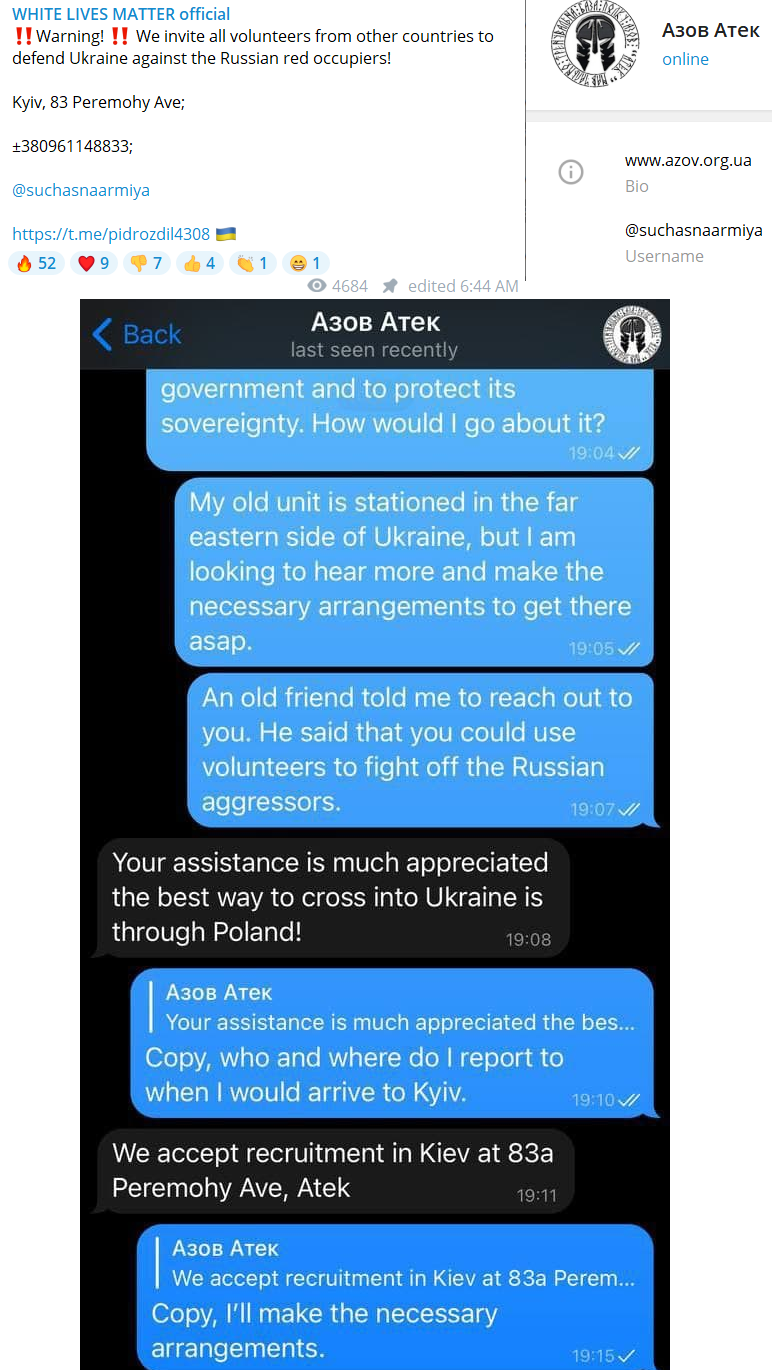 The largest player, the Telegram page WLM official, despite its name regularly glorifies Whites being killed. This isn’t just a one time exception, WLM official is the main page posting or forwarding videos of Russian losses. One must ask who would revel in such pleasure at fellow Whites being brutally slaughtered? More importantly, why would American Futurist and James Mason associate with with multiple openly anti-White telegram pages? Just because a page posts White women in wheat fields doesn’t mean it’s actually pro-White. 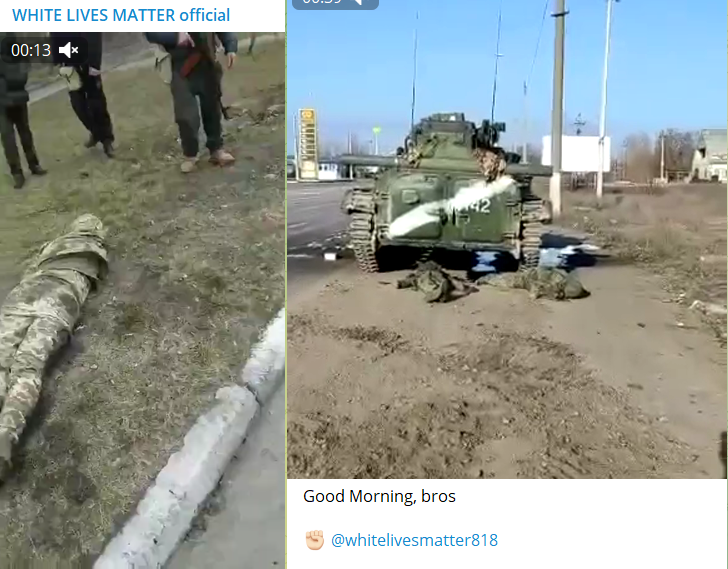 WLM Official trivializing the deaths of at least 3 Russian soldiers, all of which who are confirmed to be white.

“Tim Turtle” would put out an opinion piece on American Futurist, representing James Mason’s stance on Ukraine. The grug-brain thesis being Russia has non-whites in it’s military, and non-whites will rape Whites, so it’s WW2 again goy! Eventually the author goes mask off, equating the situation to Al-Qaeda and Afghanistan in the 70s. The idea being that America turned a blind-eye to Islam during the Cold War, and the same for pro-US nazis. Unfortunately for “Tim Turtle”, his lackluster understanding of history misses the Saudi Wahhabist funded schools and what “Taliban” actually means.

If an NS insurgency against Russia in Ukraine breaks out, we will see foreign volunteers flock to join them in their struggle just as we saw foreign muslims go to Afghanistan during the Soviet-Afghan War to get training and experience….Experienced Insurgents however, that’ll be a gift from God and in the greater NATO v. Russia geopolitical pissing match, just as the US turned a blind eye to the Salafi Jihadists growing and gaining expertise in Afghanistan in the 1970s-1990s until it was too late.

Using Zog to own Zog is a failed strategy that’s gotten the modern right where it is. It’s playing with a fire that ultimately makes White interests much harder to pursue in the long term. Ultimately any nationalist effort will be thwarted or subverted in the face of US global hegemony. One only needs to look back to The Years of Lead to see parallels. Backing US globalism, siding with NATO and Azov Battalion against Russia is the opposite of acceleration, prolonging a fake world. 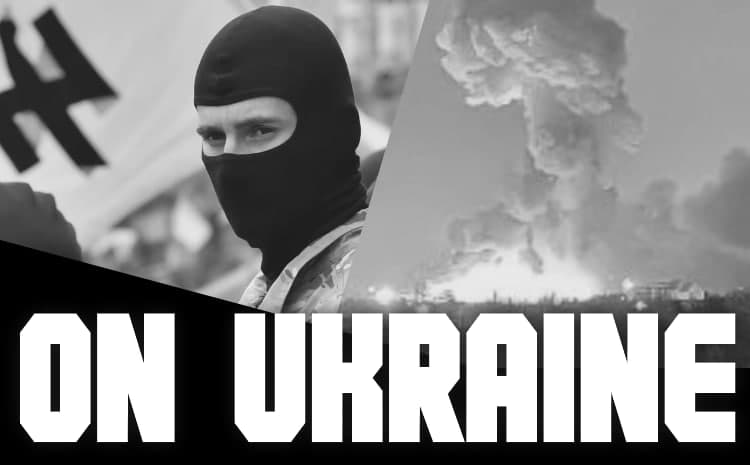 Edge, Glow and Nothing Else

The article then ends, imploring both native Ukrainians and foreigners to die fighting for NATO. Then in an epilogue, the article lists instructions on how to make bombs, IEDs and guides on guerrilla warfare. (So edgy!). Remember, you’re the real dissident because you downloaded bomb-making guides from Discord and shilled for NATO. 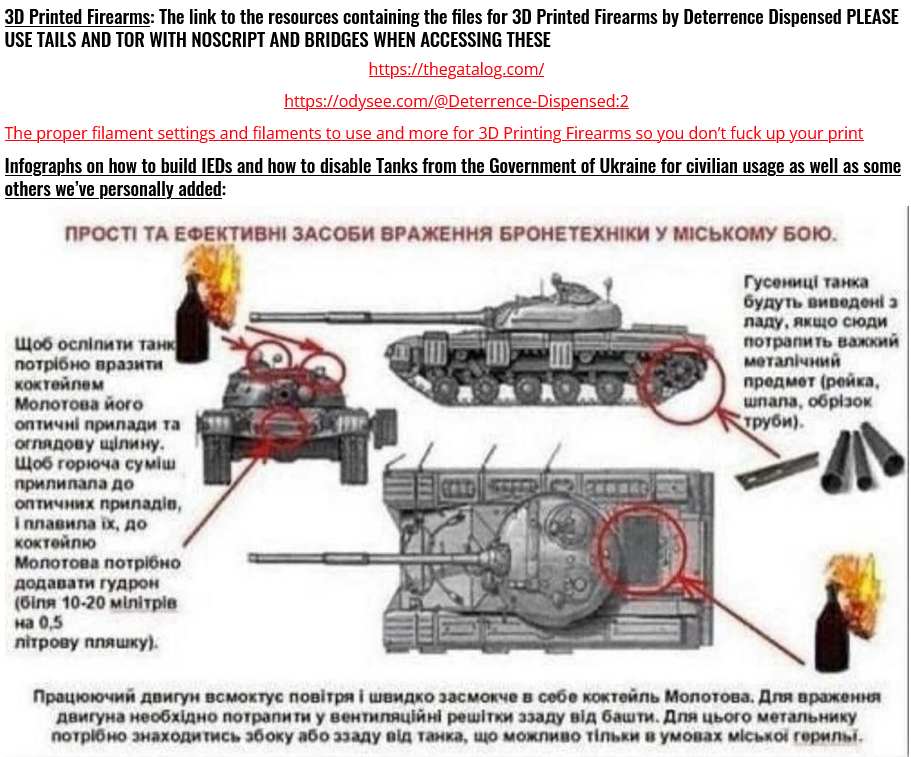 “Here’s how to commit crimes on behalf of the CIA and Ukrainian government, have fun!!”

Throughout, the article name drops other right wing figures, such as Eric Striker or Andrew Anglin, and their respective stances. However, rather than engaging, the article chastises and fedjackets to avoid addressing any common criticism in good faith. The author attempts to debunk the criticism Israel has taken any role, but ignores the Ukrainian embassy In Israel openly begging for Jewish conscripts. This attempt to run defense for Ukraine and the Azov Battalion reveals an overtly sinister political agenda.

Read Defense of the West

Historically, the connection between Azov + NATO and O9A / Atomwaffen has been virtually non-existent. There was one case where two Atomwaffen members attempted to join, only to get rejected for glowing too hard. However, with this recent development, now there’s definitive proof that Atomwaffen aligns itself openly with NATO and US intelligence interests. They claim the same NATO who bombed Whites in Yugoslavia and caused the migrant crisis via Libya is suddenly pro-White.

Needless to say, anybody with a brain should be able to see how these pages pop up solely to shill for an agenda. Supporting NATO isn’t not being pro White. Nobody is asking you to like Russia or Whites dying in a war is good. However, to promote Zog because you think you can own Zog is totally foolish. With how inorganically all this Ukraine worship popped up over night, that should make anybody begin to question its motives. With them working on behalf of the Ukrainian state and NATO to recruit or donate, there is little left up to the imagination. 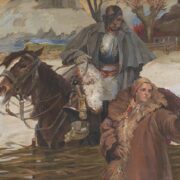 Thoughts on the Ukraine-Russia War