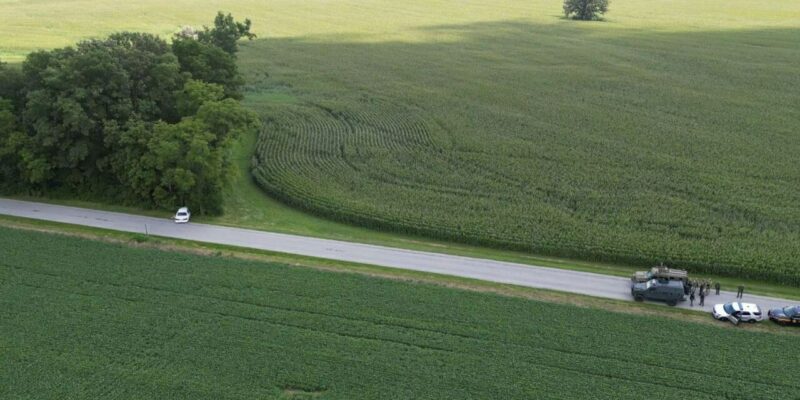 Note: This is a breaking news story and will be updated as details arise.

After a lengthy standoff with police, Ricky Shiffer was shot and killed after attempting to break into the Cincinnati FBI office. While authorities have yet to determine a motive, they’re⁠—of course⁠—looking into whether he had any ties to “extremist” groups, especially those related to January 6th. And currently, all signs point to it being a direct retaliation against the FBI for their raid of Trump’s Mar-a-Lago Summer home.

Shiffer arrived at the visitor screening facility around 9 a.m and attempted to breach the entrance while donning body armor. This triggered an alarm and immediately prompted agents to respond, and Shiffer to flee. The man then sped down Interstate 71 for around 20 miles before being spotted by a state trooper while stopped at a rest area. 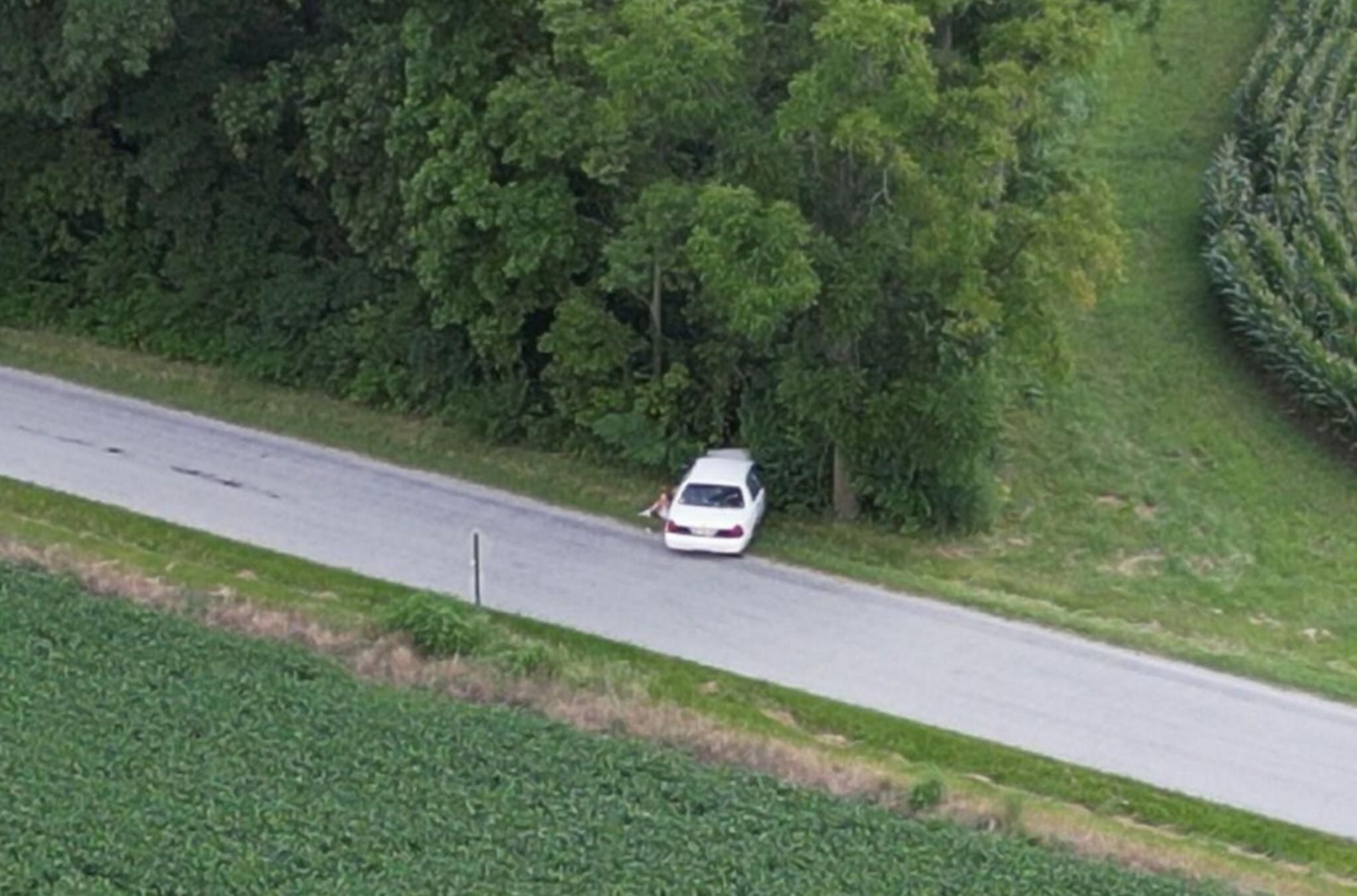 Shiffer next to a cornfield while firing on police

Shiffer then exited the interstate in favor of rural roads while being pursued by police, and finally stopped at an overpass, only to exchange gunfire with officers. This led to a multi-hour stand-off with police, in which they tried and failed to negotiate with him before attempting to use less-than-lethal methods which were also unsuccessful. The standoff finally ended when Shiffer raised a rifle at officers and was fatally shot by police. 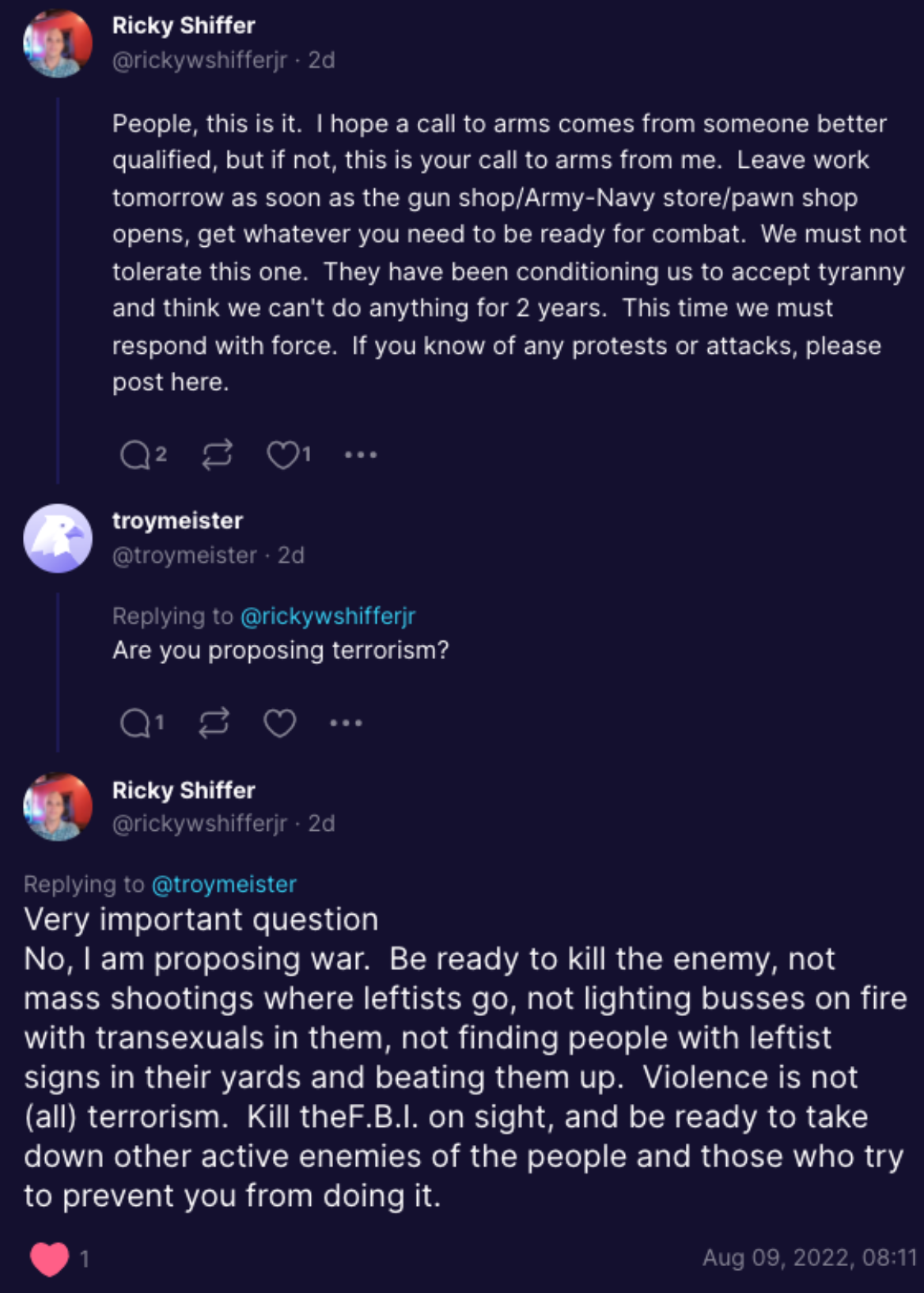 Shiffer posted to Trump’s TruthSocial two days before the attack

Shiffer had an active account on the Trump social media platform TruthSocial and made multiple posts about being prepared to kill federal agents if the need arose.

He even managed to live post about his current situation as it unfolded.

Who was Ricky Shiffer?

By all accounts, Shiffer was an avid Trump supporter and unfortunate victim of almost every pitfall and trap lobbed at conservatives. He was present on January 6th, but somehow also felt that it was done by Antifa, writing on Twitter:

I was there, We watched as your goons did that. When I told the ones trying to break back in that Trump tweeted be peaceful, one of them said, ‘Fuck Trump.’

In another post, he re-emphasized his hatred of the FBI and critiqued leftist candidates:

Be ready to kill the enemy, not mass shootings where leftists go, not lighting busses on fire with transexuals in them, not finding people with lefist signs in their yards and beating them up, Violence is not (all) terrorism. Kill the F.B.I. on sight, and be ready to take down other active enemies of the people and those who try to prevent you from doing it.

In a final Twitter post, he extolled the virtues of The Proud Boys, urging fellow patriots to get involved with them:

Save ammunition, get in touch with the Proud Boys and learn how they did it in the Revolutionary War, because submitting to tyranny while lawfully protesting was never the American way.

The Tragedy of Trumpism

Warren Balogh’s post on the National Justice Party’s website from just two days ago seems especially poignant now, as he details the sad reality that Republican leaders couldn’t care less about their own supporters.

But honestly, this is the inevitable result of a man who fell into the wrong radical ideology and acted according to his own political conditioning and delusions. These are people who have been fooled into thinking Trump is fighting for them, on their side against an enemy they can’t even define.

And can you blame them? Not for the violent reaction, but the impotent ideology. Everyone who hates them also hates Trump, and so they can’t let go of him, no matter how much it hurts them. They simply lack the political vocabulary to reach out for something more honest and substantial. To them, winning is when Trump became president, and anything else is inconsequential. They’ll latch onto the Trump train and never come to understand that the actual victory they want is difficult and will never be provided to them by the Republican party.

There is something depressingly poetic about the last stitch of popular White tribalism trickling out from a Jew-supporting reality TV star. 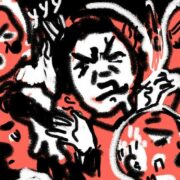 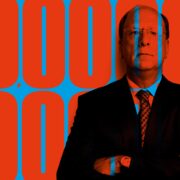