On March 29th, the Jewish Daily Forward released an article titled “‘Jewish blood helps’: In Ukraine, what once held people back now speeds them to safety”1 which explains how prospective Jewish refugees from Ukraine are given preferential aid from Jewish NGOs to assist their journey to western countries and Israel. According to Diana Simonova, a 21-year-old refugee from Ukraine with a Jewish grandmother, “Maybe nowadays, it’s an advantage being Jewish.” Imagine that! She almost sounds a little anti-Semitic; but nonetheless, congratulations to Ms. Simonova for finally figuring out her people run the west and that she can use this to her advantage.

Someone else who seems to have figured out that claims of Jewish familial relations can advance their career is Art Acevedo. Acevedo first came to my attention back during the 2020 Summer Of Racial Peace And Understanding when, as the chief of police for the Houston Police Department, he made the absurd claim that the black rioting going on in Houston was actually being caused by young, White men from out-of-town. In one speech to a crowd of Black Lives Matter agitators, Acevedo tearfully explained how he felt sympathy for George Floyd and that his department would march with “the community”; but he also told the crowd he would not tolerate rioting and to “pay close attention because these little white guys with their skateboards are the ones who are starting all the shit.” Acevedo later doubled down on that position, and at a press conference at Houston city hall said, “We’re seeing that there are people, who are not people of color, who are coming into this city and other cities to actually start agitating and actually engaging in violence.”2 The claim was so absurd that a reporter named Deborah Levy Strauss who works for the local Houston NBC affiliate had to concede that Acevedo was not telling the truth and that most people arrested in Houston for rioting were Houston natives, and that the arrested were “racially diverse”. Houston is only 30% White and 22% black, and I leave it to the reader to guess what “diverse” meant in this particular situation.

Acevedo claims he is a Republican which, to any sane person, is already enough of a self-indictment of your worthlessness, but Acevedo goes one step further and calls himself a “RINO”3 and was featured at the 2020 Democratic National Convention where he endorsed Joe Biden.4 However, this apparent act of partisan betrayal did not stop Acevedo from being poached in March of 2021 by the Republican, Cuban mayor of Miami, Francis X. Suarez, who is apparently a possible contender for a 2024 Presidential run.5 Suarez called Acevedo “the Tom Brady or the Michael Jordan of police chiefs”, but that honeymoon did not last long and Acevedo found himself out of a job in October of the same year after making controversial Internal Affairs decisions and telling hundreds of Miami police officers that the city was run by a “Cuban Mafia”.6

After leaving two different police departments in less than a year, you would probably think Acevedo’s law enforcement career would be over…and, so far, you would be correct! But Acevedo was not out of work for long, and in December he was signed to a contributor contract by CNN.7

Now, “why does any of this matter?” you are probably asking. Well, believe it or not, it all has to do with how Art Acevedo started signaling with his retweets on Twitter to his ninety-seven thousand followers on November 22, 2021, about five weeks after being fired by the city of Miami and about three weeks before he signed on the dotted line for his new CNN gig. 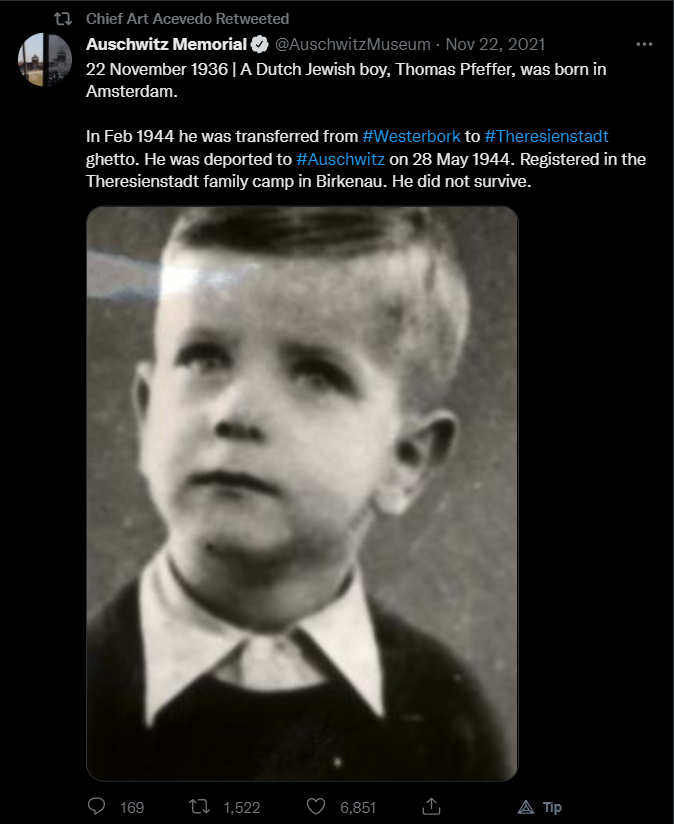 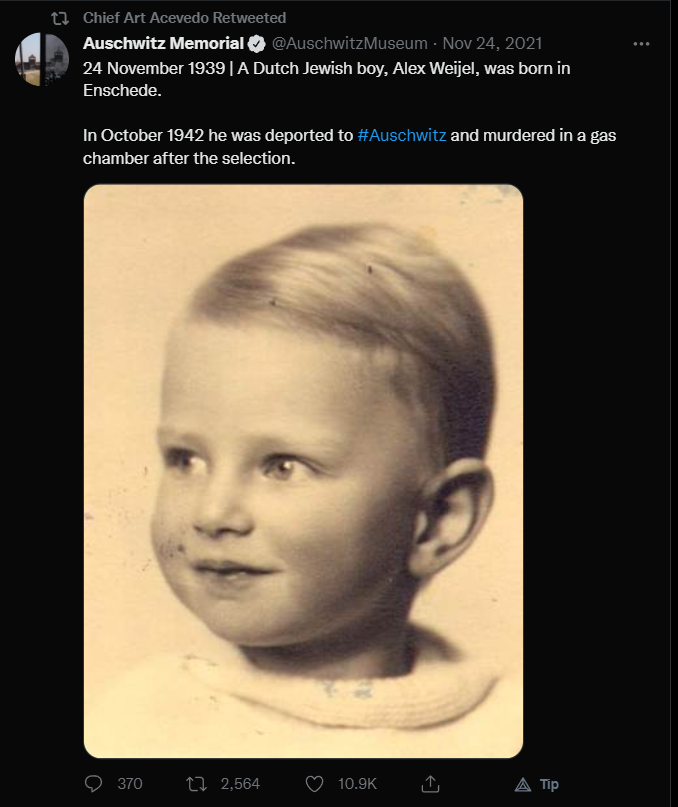 In late December, after being signed by CNN, his retweets of posts from the Auschwitz Museum about supposedly gassed Jewlets became an almost everyday occurrence. 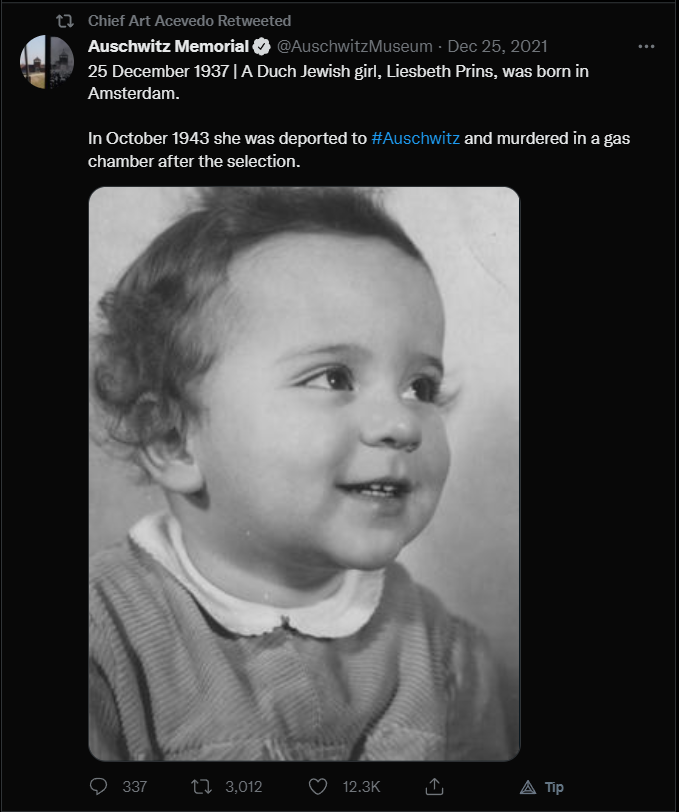 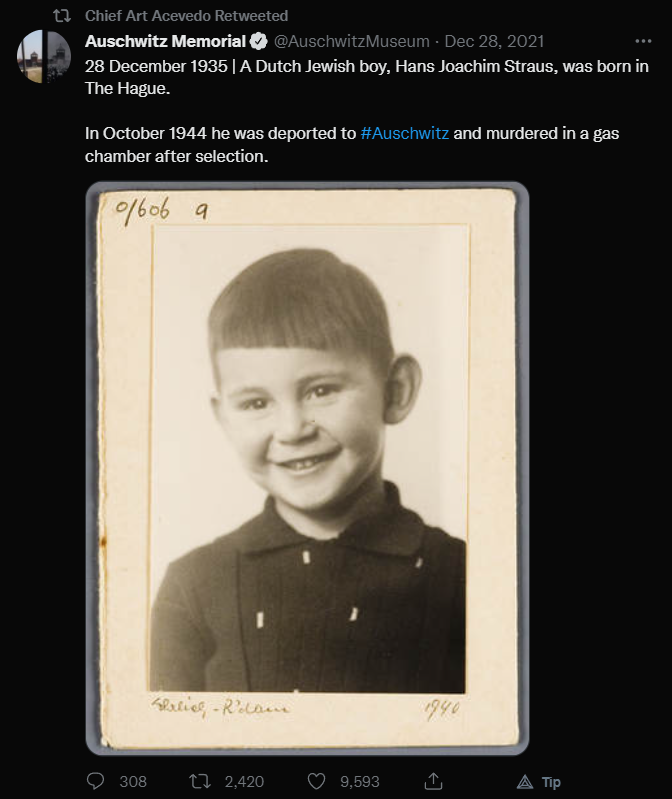 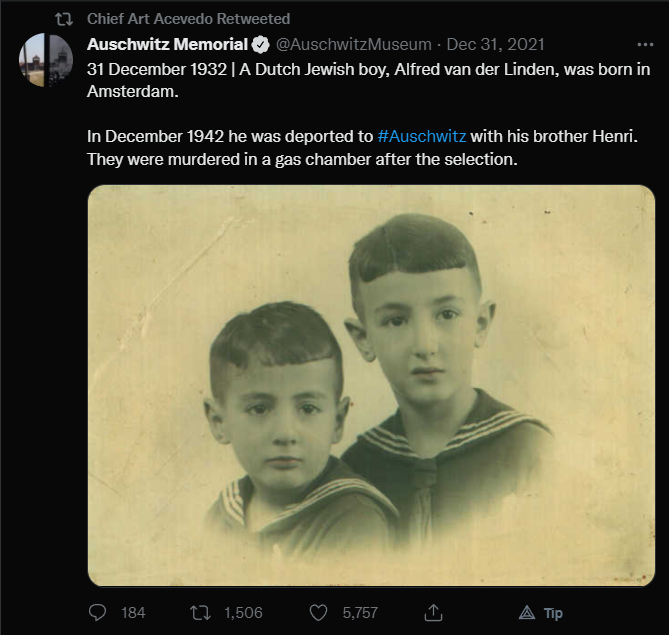 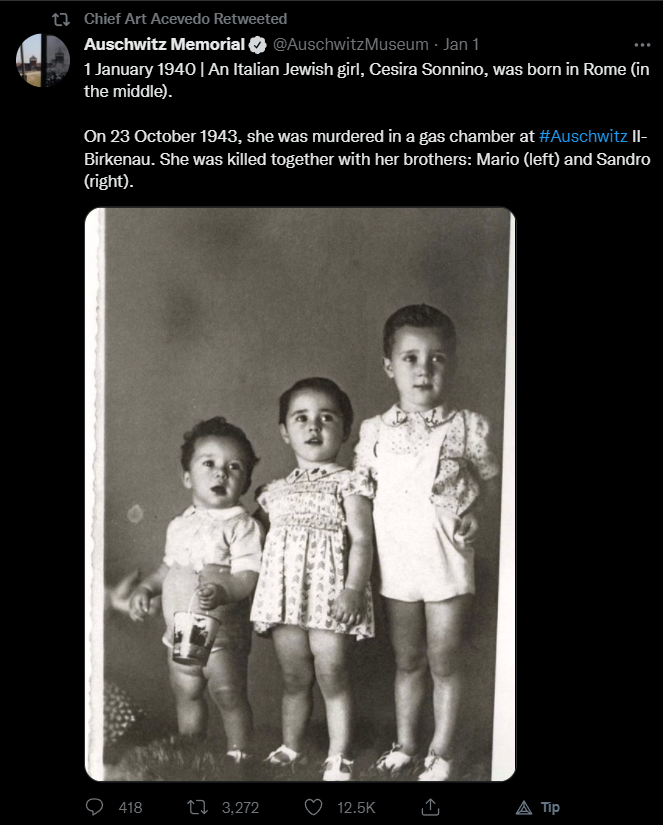 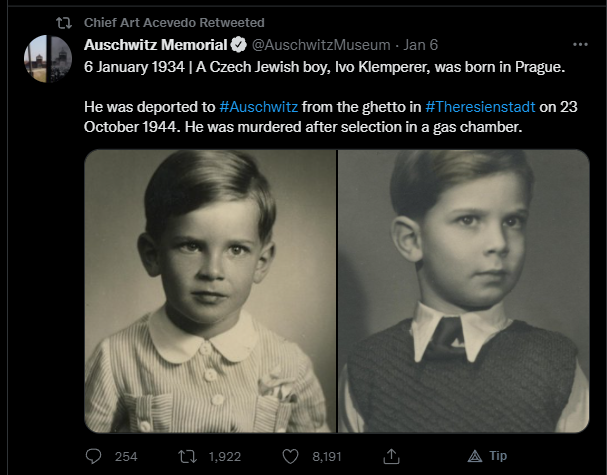 Apparently Acevedo had people asking him why he was so insistent on reposting the Auschwitz Museum all the time, and he tweeted, “Our great uncle Billy was French/Jewish and the only member of his family to survive WW-II. I still remember the serial number tattooed on his forearm, so I do for him and the 6 million Jews & millions of other  victims of the Holocaust.” He further explained, “And we live in an era where too many folks want to erase, deny, and/or rewrite history, making the efforts of @AuschwitzMuseum to highlight the stories of lives taken simply for their chosen religion that much more important and worthy of our collective support.” Remember, less than a year earlier this man was the police chief of America’s 44th and 4th largest cities.

His frequency of Holocaust affirmer signaling has seemingly accelerated. Within the past month, Acevedo has retweeted the Auschwitz Museum twenty three times (gallery below, scroll through).

So Acevedo is not technically Jewish, as presumably his “great uncle Billy” is his relative by marriage, and not blood, or else he would talk about more than one Jew in his family and explicitly say that he himself is of Jewish descent; but this does not seem to have stopped him from leaning on this distant familial connection to Jewry for his own personal benefit. More importantly, Jews do not seem to be upset at him for this blatant pandering. So long as he affirms Jewish narratives, even in an obviously obsequious way, Jews are content to throw scraps of prestige and wealth his way.

Acevedo’s behavior makes little sense without at least a basic understanding of the Jewish question. Why else would a Cuban immigrant cop debase himself on the internet to an audience of almost one hundred thousand people in order to curry favor with Jews? There can only be one possible answer: we are right about who runs America. Were it not for Jewish power, sucking up to a tiny ethnic group that makes up less than two percent of the population would be a complete waste of time. You would find no sinecures at the end of that quest, only embarrassment. It is only because of the Jewish patronage system that sycophants like Acevedo behave the way they do, and we will all be much better off, at the very least due to the lack of cringe, when that system is finally smashed.

Oh yeah, and if you were paying attention and saw that Acevedo’s profile pic is the Ukrainian flag, kudos to you. 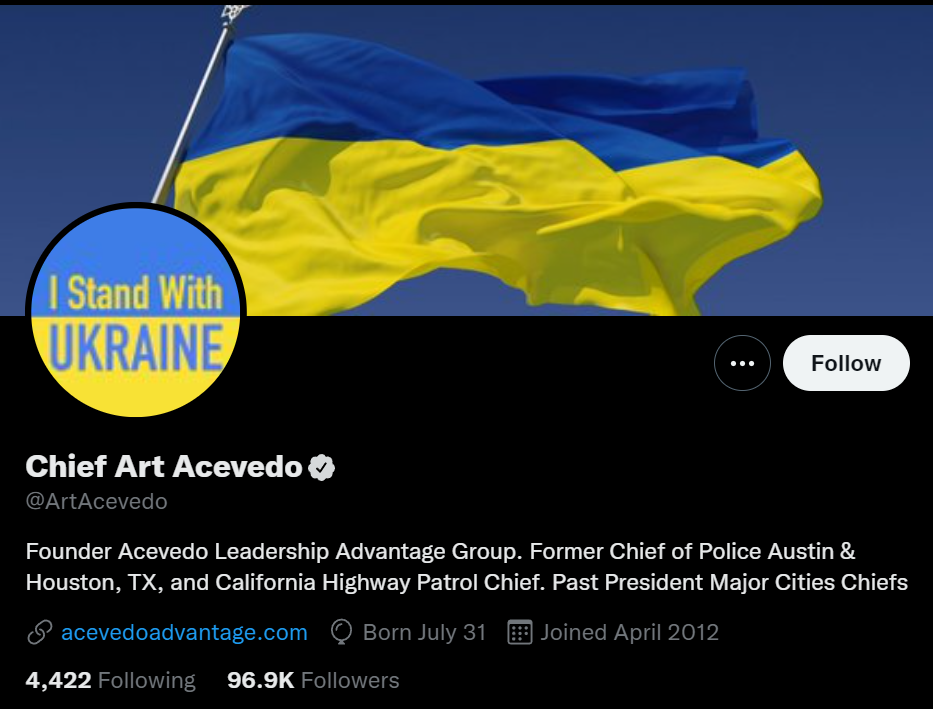 Wakin’ the Nightmare: Surviving Prison as a Political Dissident

The following article, which was submitted to the Hyphen-Report by an average, working-class ...
Uncategorized