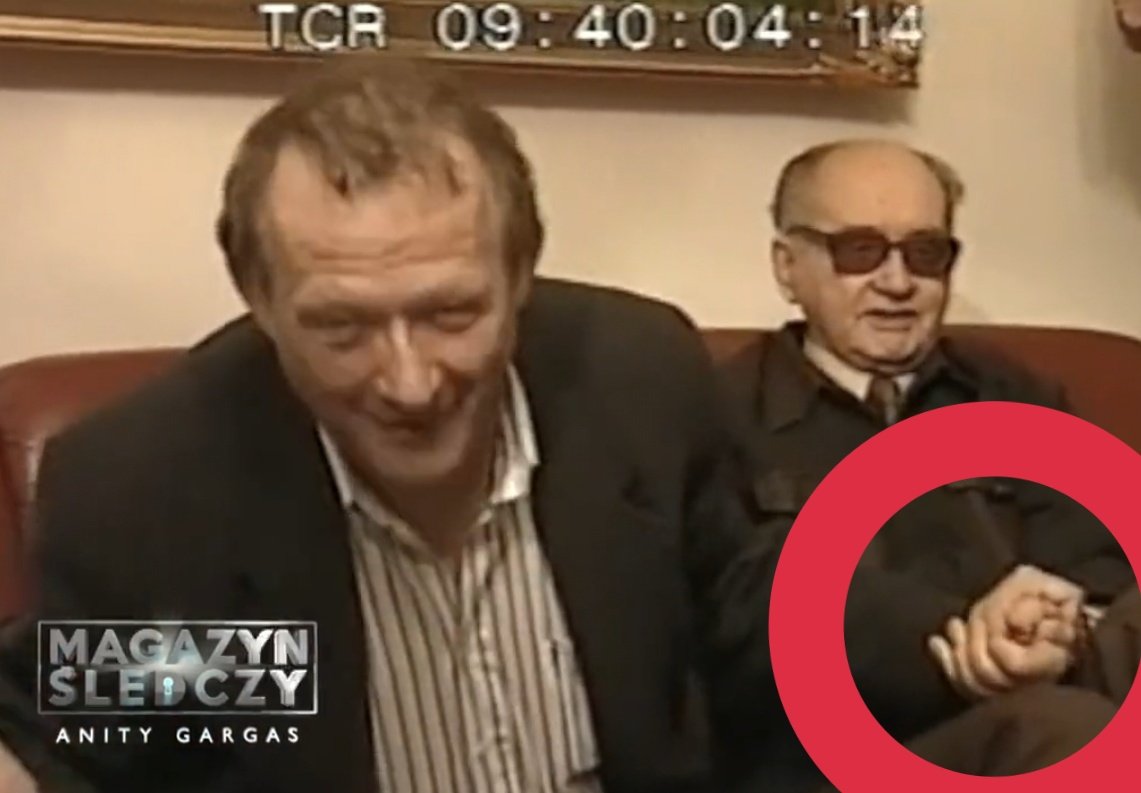 This week a video was released that revealed the rotten truth of the basis of the Polish 3rd republic, a truth about the transition from communism that deeply shocked many Polaks. It confirmed prevalent right wing antisemitic narratives. It is a video from 2001 of one man, Adam Michnik, kissing and telling another man, Wojciech Jaruzelski, that he loves him.

An American equivalent to this situation would be if a video came out of Jon Stewart kissing and telling Dick Cheney he loves him. Hyphen readers would not be surprised, but Stewarts fans surely would be! 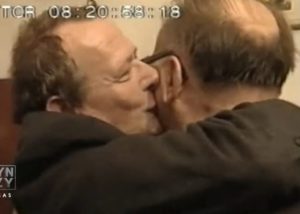 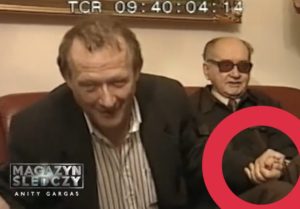 I know a lot of background is needed to understand this. I will explain. First I need to tell you who Adam Michnik is.

Adam Michnik was born to a family of prominent Communists in 1946. His step brother was a notorious Stalinist prosecutor. His step brothers father was the first secretary of the communist party of Ukraine. As a young man Adam himself was a devoted communist, and it looked certain like he was destined to become a communist official.

A power struggle was occurring within the Polish communist party. Jews had taken control of Poland in 1945, riding in on the back of Soviet tanks. These were Polish jews who had fled to the USSR at an early point in the war. A triumvirate ruled Poland in this early period, and 2 of the 3 men were jews. This of course was happening all over eastern Europe, and compared to Hungary where 4 out of the top 4 men were jews there was actually a sliver of ethnic Polish representation to make the government more palatable. Notably a majority of the directors of the hated secret police were jewish, despite only 200,000 jews being in Poland. In many peoples opinion this was because jews were willing to torture and rape Poles, a job ethnic Poles wouldn’t do. I would recommend reading about Bloody Luna and Salomon Morel if you want to learn more about this period. In Poland we call it Żydokomuna, jewish communism, an unacknowledged fact of history. 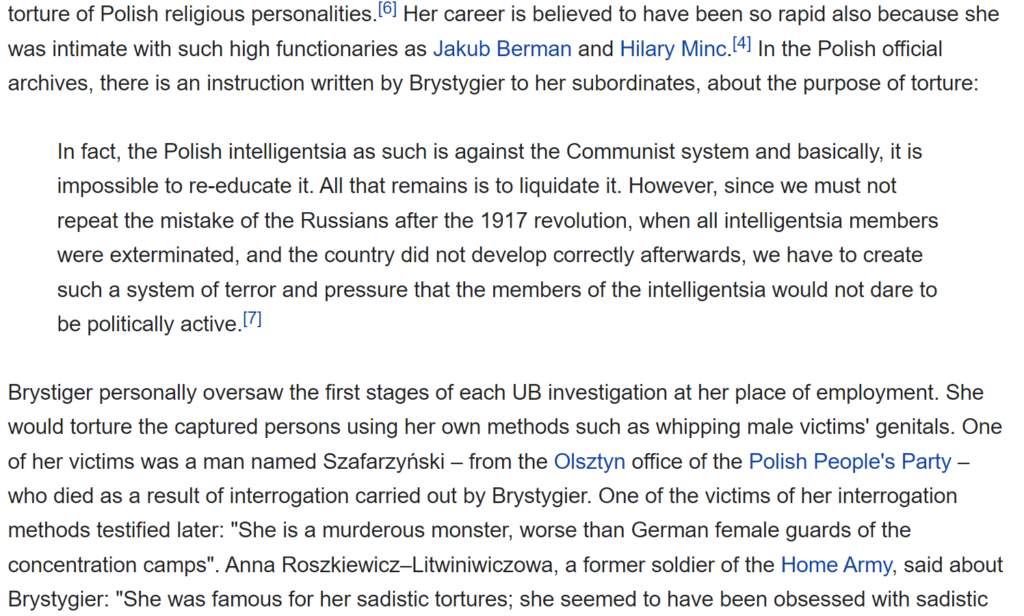 Brystygier aka Bloody Luna. Berman, Minc, and Brystygier were all jews

However by 1968 things had changed. The position of jews in the Soviet Union was weakened by allegations of disloyalty to the Soviet republics due to their secret allegiance to Israel. This allowed the Poles to get their revenge on the jews. Under the guise of an ‘anti-Zionist’ campaign the president of Poland called jews a disloyal 5th column, more loyal to Israel than Poland. The minister of the interior, Mieczysław Moczar, went around Poland asking the bureaucracy to make lists of jews and fire them for being jewish. It resulted in the vast majority of jews leaving Poland, Poland taking away their citizenship and the ability of their descendants to claim citizenship (loss of citizenship rights was rescinded and apologized for by PiS a few years ago). Poland became a pariah state.

This is when Adam Michnik enters the Polish cultural and political arena for the first time. He was a student at the time and was among the most prominent of the “Student protestors”, a largely jewish privileged elite class rebelling against the “anti-Zionist” purges.

Adam Michnik, once a devoted communist, saw the evil of communism, how totalitarian systems are bad, and became a devoted anticommunist in 1968.  Or so the story goes. If you ask a Pole to describe Michnik they would likely say political dissident anticommunist opposition intellectual. Michnik was a leader in the 1989 round table negotiations that transferred power from the communists to the new democratic government, and a hero in transitioning Poland from Poland. He won many awards such as “European of the year”. Since the fall of communism he has been the editor-in-chief of the extremely influential and liberal Gazeta Wyborcza, which is owned by a Soros backed NGO in Manhattan – media development investment fund). Just a coincidence both are jews says the polish liberal.

This of course is not what actually happened, and the video of renowned anti-communist leader Michnik KISSING the communist dictator of Poland makes this false narrative of motivation and ideology impossible. As I said, imagine a leaked video of Jon Stewart kissing Cheney in 2010. The perception that Jon was a staunch anti war leader would crumple, and many questions would be brought forward.

The Truth of the Round Table

The leader of solidarity, the ethnically Polish frontman, was Lech Wałęsa. We now know that Wałęsa was almost certainly a communist informant and being blackmailed by the communists. No one knew this, the communists never mentioned it even after the fall of communism, but Wałęsa knew that they had the blackmail. It hung over his head and in all likelihood allowed him to be controlled.

Below is a picture from the round table negotiations. On the left is Wałęsa on the right Michnik. 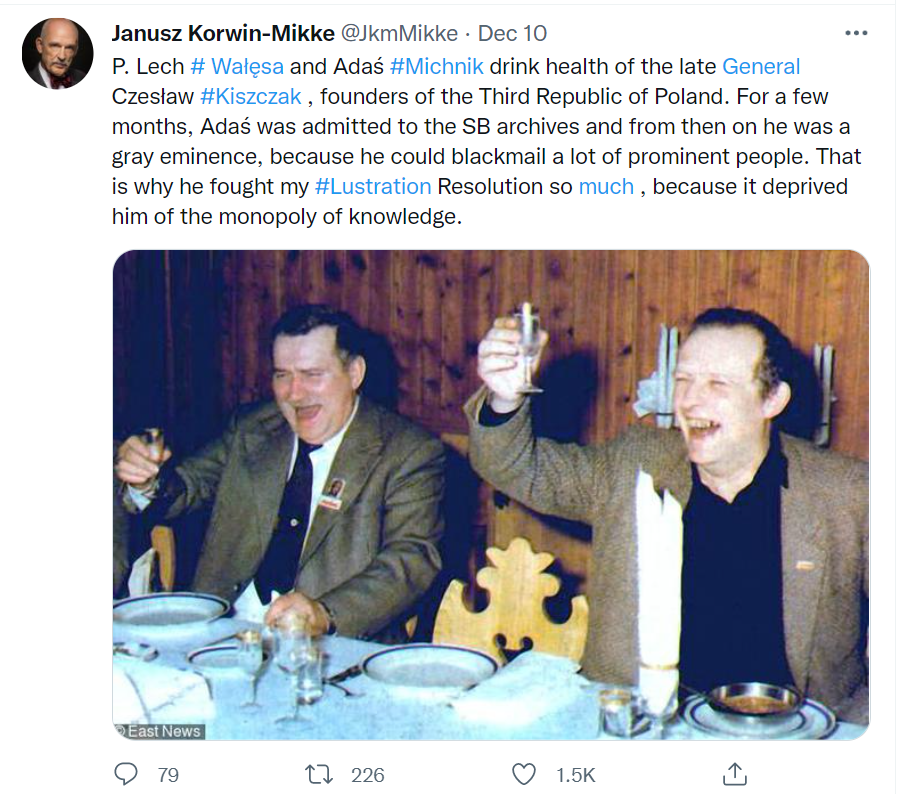 Korwin(based) is alledging that at these Round table negotiations Adam Michnik was invited and given access to the communist police blackmail files. Which would have included the man on his left. Michnik never mentioned any of this, and after communism fell advocated for forgiveness of communists and against lustration attempts. It makes me think of the Epstein case in America.

AND IT GETS EVEN WORSE.

In 1980’s Polish media was controlled by the minister of broadcasting, a powerful man who controlled the communist monopoly on media. This man was Jerzy Urban. There is a video of Jerzy Urban getting in a car with Michnik and a blond in expensive outfit who would later become a leading anchor of our largest private TV network, TVN.

To use the American analogy again, imagine Jon Stewart, Douglas Feith, and a young Rachel Maddow all caught on camera in the same car. Really makes you think!

I can go on. But I’ll end with what happened when Adam’s half brother Stefan Michnik, the brutal and notorious Stalinist criminal, died. Stefan died on July 27, 2021 in Gothenburg(yes Sweden refused to extradite, he moved there in 1968). His brother Adam three days later published an obituary published in Gazeta Wyborcza. 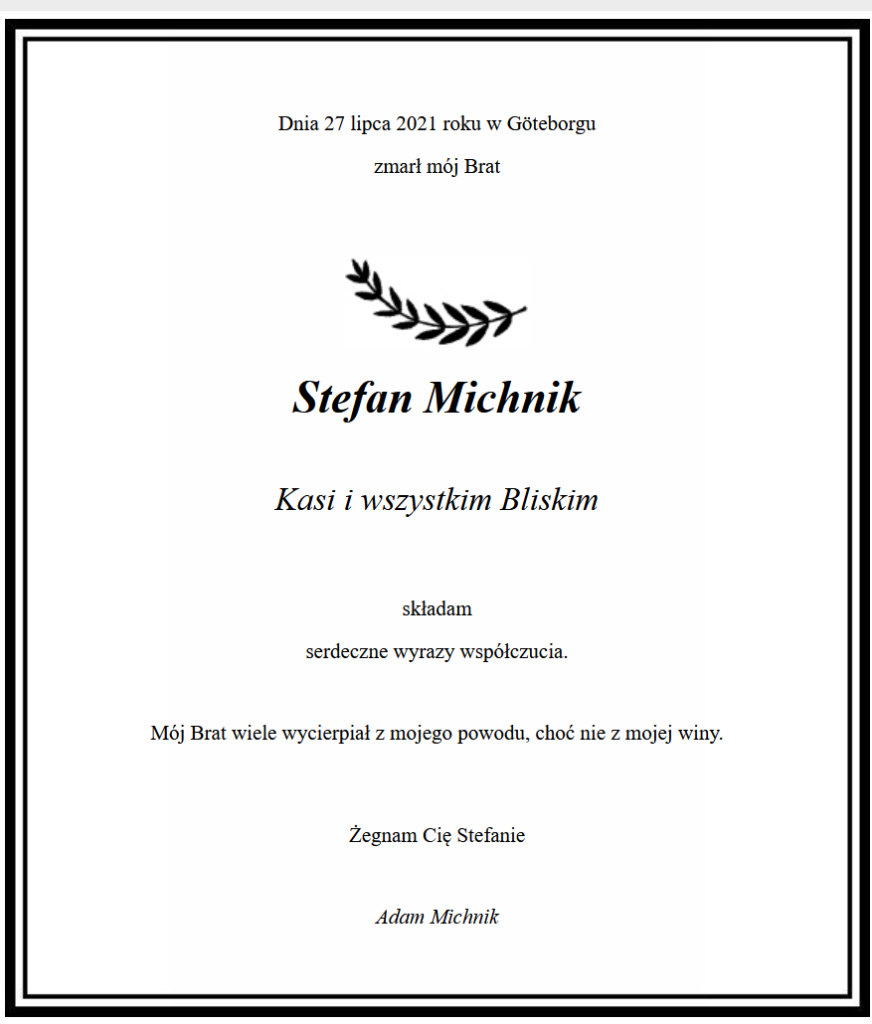 “Kasia and all my relatives, I would like to express my sympathies. My brother suffered a lot because of me, although it is not my fault. Goodbye Stefan” – Adam Michnik

Hope you enjoyed this hot article,