Cue up the 10-hour crab rave: the Butcher of Baghdad is dead. 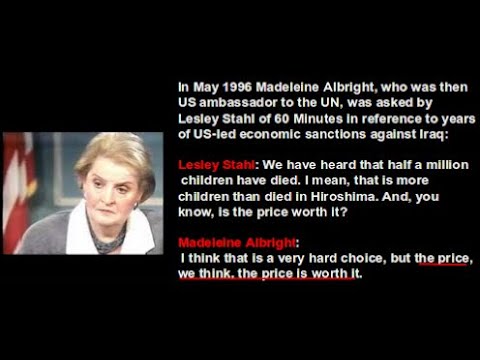 The international community, the adults in the room, and the rules-based international order would like to remind you that you are evil for not liking this outcome.

Madeleine Albright has been hailed in death by Reuters and other “impartial” news agencies as a fearless feminist leader.  The stream of breathless praise is punctuated only by deeper fawning adulation in the mainstream press.  Reuters calls her a “refugee” and a “tough-talking diplomat,” but I think “Morgenthau Democrat” is a better appellation given her bloodlust for non-Jews.  Yes, Albright was a Jewish Zionist.

A Nobel Peace Prize winner awards the Medal of Freedom to commemorate Yemen and Iraq being peaceful; free.

One of the funniest and most maddening bits from that Reuters article is actually the part that discusses her discovery of her Jewish heritage.  It is presented as if she was just wandering through life, picking up titles and positions, when one day the WaPo hooked her up with some free heredity research.

She was raised a Roman Catholic but after she became secretary of state, the Washington Post dug up documentation showing that her family was Jewish and relatives, including three grandparents, died in the Holocaust. Her parents likely converted to Catholicism from Judaism to avoid persecution as Nazism gained strength in Europe, the paper reported.

This actually contradicts her Wikipedia entry which sources the WaPo article but conceals any motivated conversion.  Instead, the Wikipedia shylocks have said her family fled Prague due to their links to the Benes regime.  The Wikipedia citation for the Benes-related flight is simply “Albright, 2003: pp. 8–9″ which one assumes is her 2003 memoir Madame Secretary. Wikipedia apparently plays it fast and loose with Jews when it comes to rules about proper citations and not citing the subject of the entry. 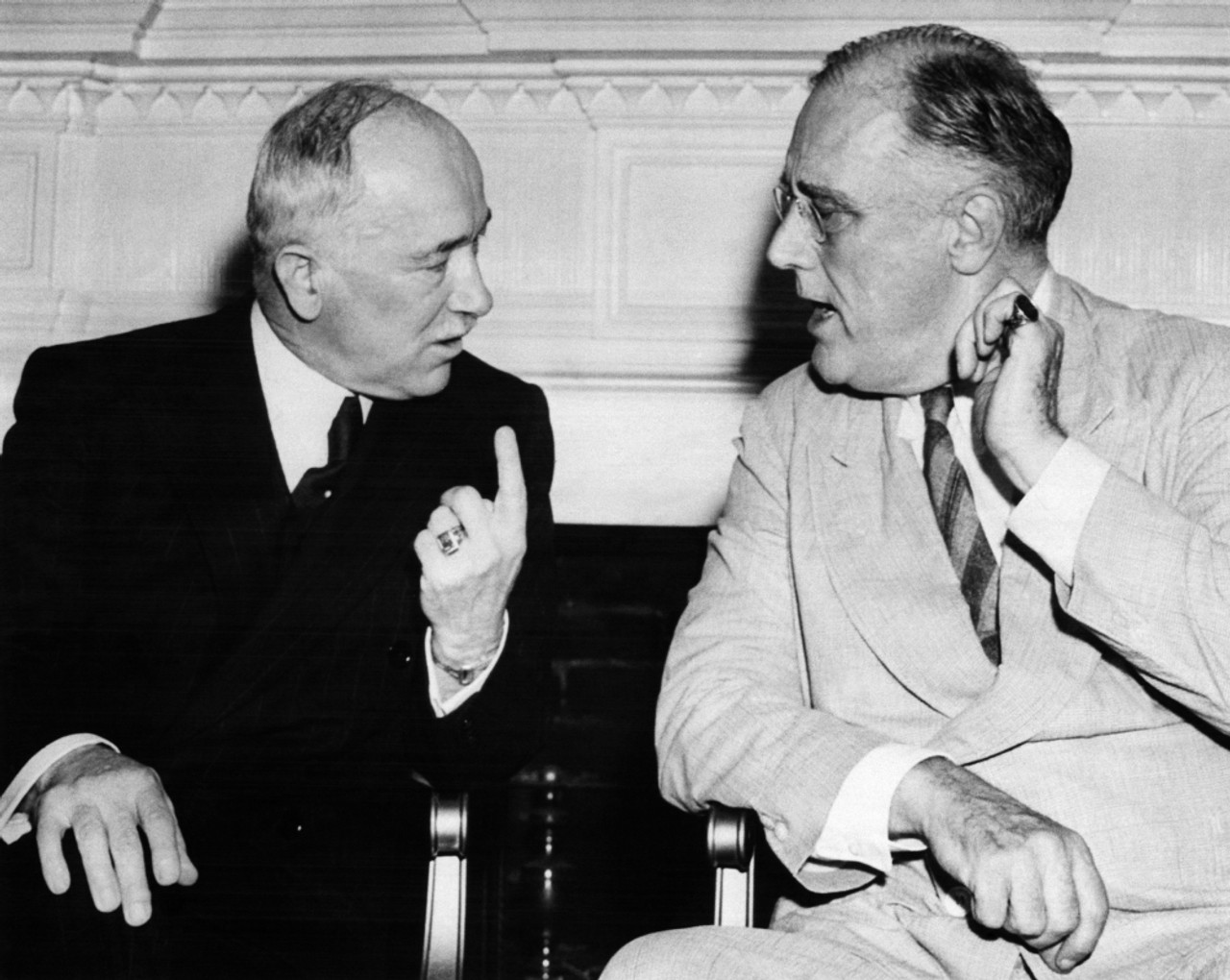 Benes and FDR. Presumably arguing about how many German kids must be starved to death between 1945 and 1951.  Benes seems to be asking for 1 million dead while FDR is getting ready to flash “five” with his hands.  FDR won, as we now know.

An interesting thing I found in researching both Albright and Benes was that Benes was a really big guy for Jews.  Here is the Jewish Telegraph Agency archive dated December 19, 1935:

The election of Dr. Eduard Benes as second president of the Republic of Czechoslovakia was hailed today in Jewish circles as assuring continuation of Dr. Thomas G. Masaryk’s democratic policy.

Dr. Benes was elected today by a vote of 340 to 24 in the National Assembly. Following the election Deputy Angelo Goldstein declared to the Jewish Telegraphic Agency that Jewish leaders were gratified with the result because Dr. Benes, protege of the retired president, could be depended upon to continue the liberal internal policy of Dr. Masaryk as well as support the Jewish national home in Palestine and rights of Jewish refugees at Geneva.

The election of Dr. Benes had been regarded as certain. For years it was known that Dr. Masaryk was grooming him to become his successor. Dr. Masaryk retired last Saturday at the age of 85. In becoming president, Dr. Benes will leave the post of foreign minister which he has held uninterruptedly since 1918.

Grooming.  Liberal internal policy.  Rights of Jewish refugees.  Someone get the Narcan because I’m overdosing on confirmation bias.  You will not be surprised at all to hear that Benes’ predecessor, Masaryk, was a big Shabbos-servant as well: he defended a Jewish murderer against a “blood libel” in the 1899 Hilsner Affair.  That case featured a Jew ritualistically murdering a 19-year-old gentile, getting sentenced to death, having his sentenced commuted by one Emperor of Austria, then pardoned by the next Emperor.  The killer lived in Vienna, free as a bird, for the rest of his life.  It is a beat-for-beat prequel to the Leo Frank trial in which an American Jew killed a 13-year-old gentile, Mary Phagan, then had his death sentence commuted by a corrupt Georgia Governor under pressure by the Anti-Defamation League.  In that case the public rectified the Jewish corruption by just killing him. 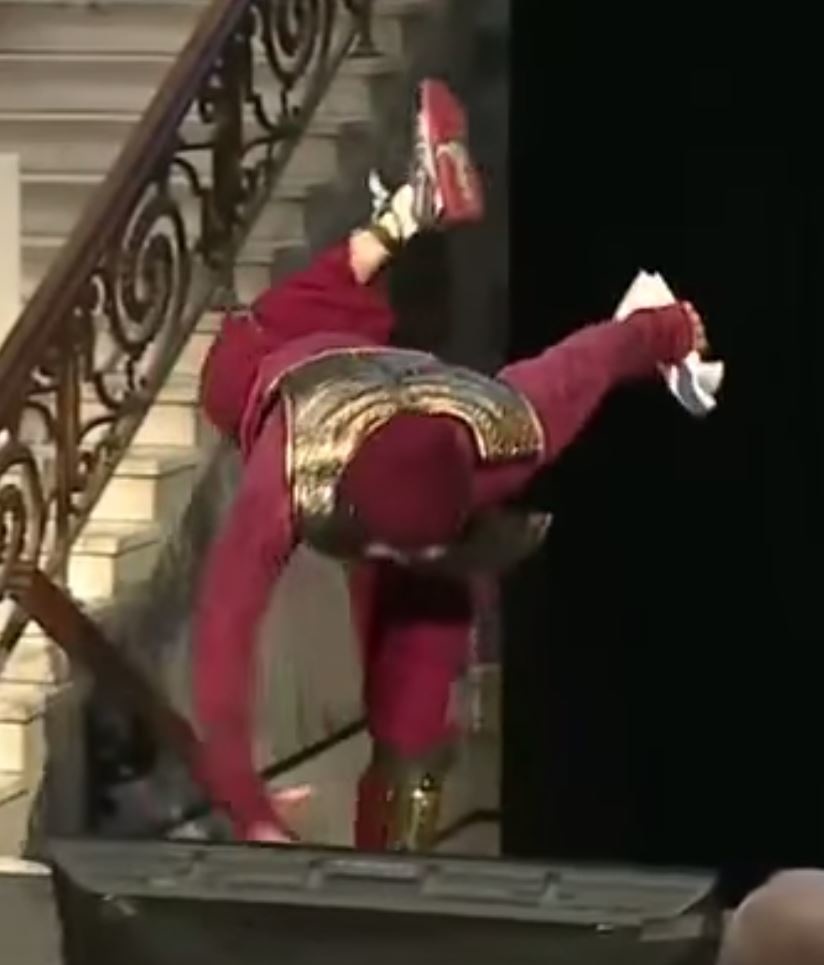 Ok, so far we’ve got a Zionist Jewess mass-murdering Arab kids, pretending not to know she was part of a Jewish political elite, then getting awarded the Medal of Freedom for her brazen Jewing.  But there’s more.  So much more.  From the same Reuters obituary:

Her father, a diplomat and academic who opposed communism, moved the family to the United States where he taught international studies at the University of Denver. One of his favorite students was Condoleezza Rice, who would become the second female secretary of state in 2005 under Republican President George W. Bush.

“It is quite remarkable that this Czech émigré professor has trained two secretaries of state,” Albright told the New York Times in 2006.

There is so much in this Reuters puff piece and even more in an excellent article by the shitlibs at Jacobin:

I’ll leave you with a parting video to see exactly how this Jewish peak-performer operated and why no one should ever trust one of these critters.  Outrageous lies, murder, extortion is not a bug with them, it’s a feature.  We hope to write up a remembrance of the killer Jew Kissinger next but first he has to croak.  Prayers up.

madeleine albright confronted by an ohio state university student in 1998 on why the US continues to bomb iraq while selling weapons to israel used on palestinians. her response is accusing the students in the room of defending saddam hussein pic.twitter.com/dHxIbhL8NF 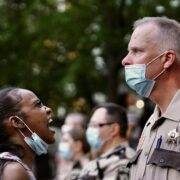