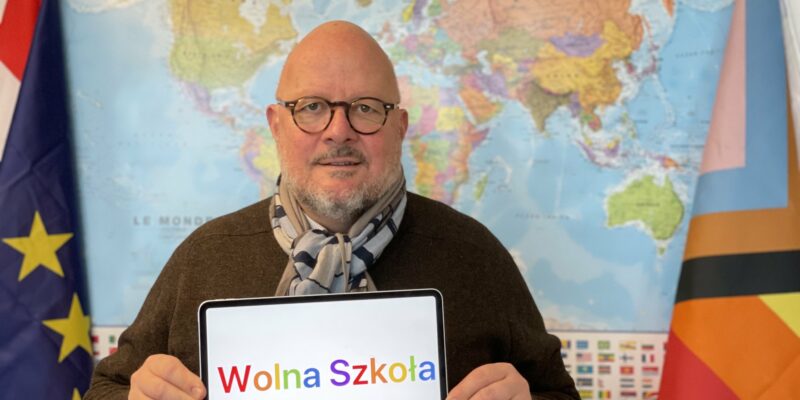 PiS passed an education amendment last week that would empower superintendents to control what NGOs and activist teachers are allowed to do in Polish schools. Schools would be required to obtain detailed information about the action plan of all associations and organizations in the schools, the outline of classes, and the material used  in the offered classes. If the superintendent doesn’t approve, he or she can ban the activity or group.

The rational for the amendment is simple. Teachers are often libtards and the schools are dominated by ideological liberals. Even in Poland this is true. It’s hard to control the schools even if the government and parents oppose liberal indoctrination. One of my relatives is in highschool near Warsaw. She told me that in her school being LGBT is cool and a kid can benefit from identifying this way, many doing so. The public school teacher is the vanguard of wokeness in Poland.

But at the higher level, superintendents, these people are basically political appointees. So giving them the power to say “NO” and punish teachers who disobey is an effective strategy. It is also true that this empowers parents as well, because they can bring their concerns over what teachers are doing to the superintendent, and PiS is atleast somewhat responsive to what their voters want so can’t just ignore parent groups. Who could object to increasing transparency in what is being taught to kids in schools? LGBT recruiters.

It’s not law yet, it needs to be signed by President Duda. He didn’t sign the ban on foreign jews owning Polish media law that I wrote about here and here. But this time only the most delusional (and treasonous!) liberal thinks PiS can be pressured by foreign power to repeal this bill. Duda ran his presidential campaign on a promise to stop LGBT ideology in general and gaying up schools in particular. 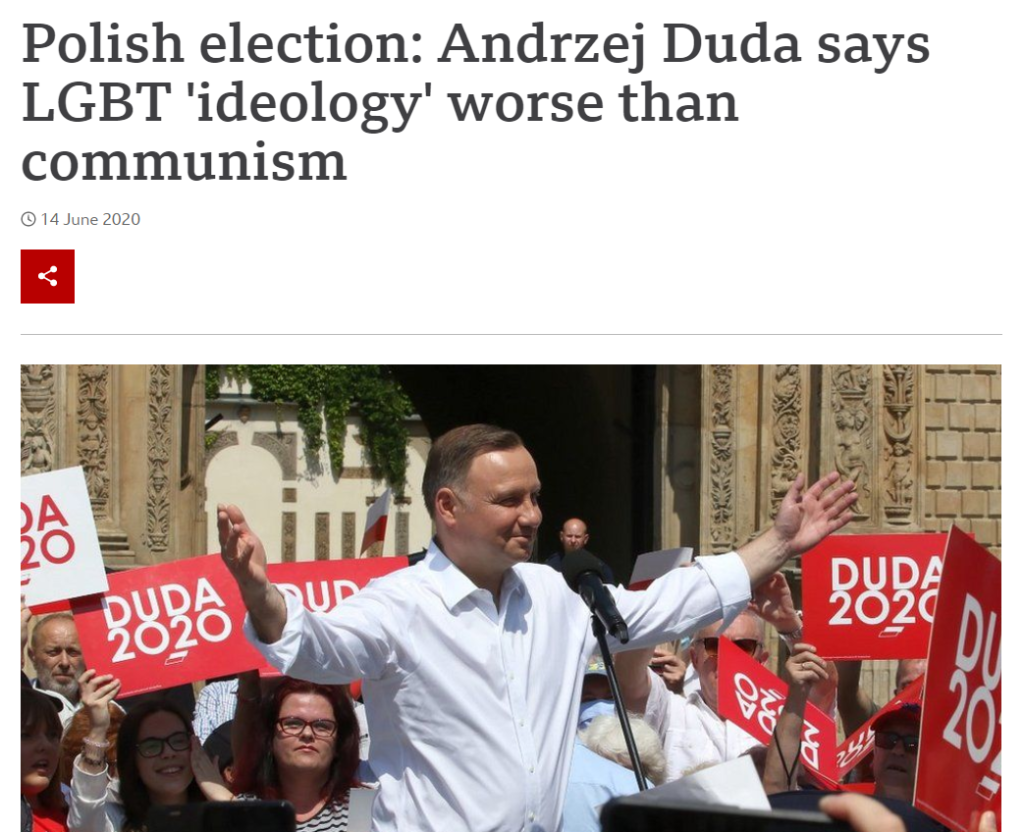 “I have faced ideologically motivated attacks… from the West and at home, simply for not consenting to the smuggling of ideological content into schools” – Duda 2020

Czarnek is our education minister, Lex Czarnek means Czarnek’s law. Liberals hate him. I thought that while what he said was correct he was just another politician saying based things but never doing anything about them, and infact incapable of doing anything. What hope was there, no matter how well intentioned the education minister is, controlling the creeping wokeness imported from America from seeping into our netflix-watching leftist staffed schools seemed an impossible task. But I have to give Czarnek and Law and Justice props. They found a good solution and will probably get it done, and importantly with decent optics (passing a Russia style law would have alienated the homosexuals at the american embassy). 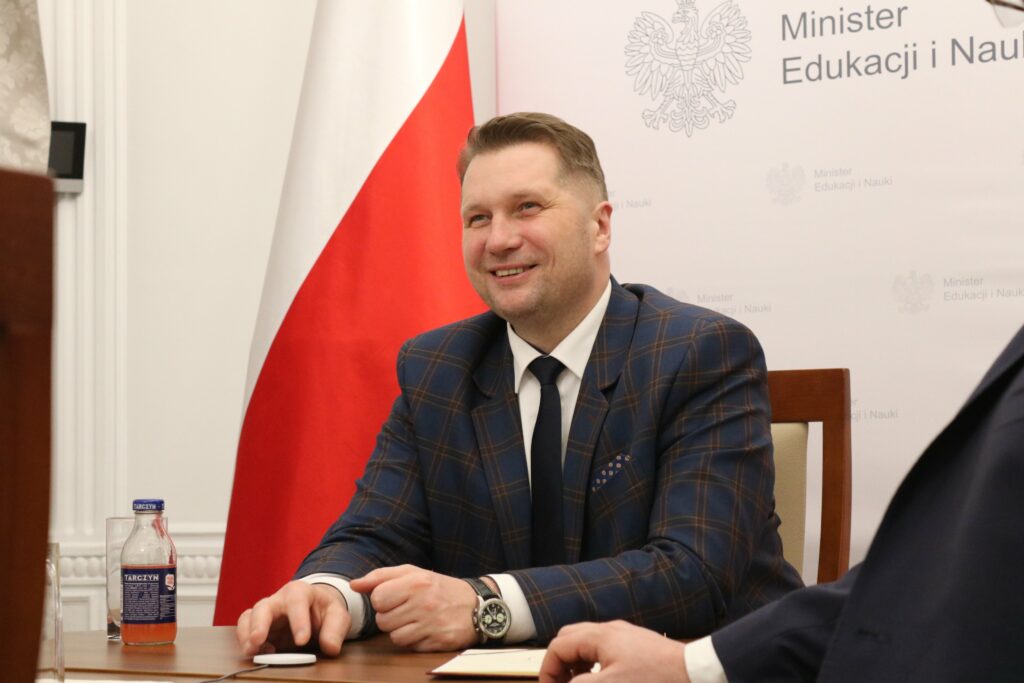 >blocks your path from indoctrinating Polish children with gender ideology

Now before we get to an analysis of Konfederacja on this issue (they voted against the bill!) let’s see the reaction of people posting the #WolnaSzkoła hashtag. I assumed these were teachers but they actually are liberal EU politicians and professional homosexuals. 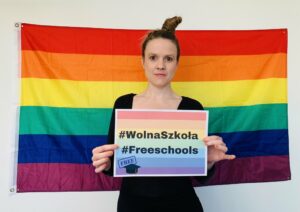 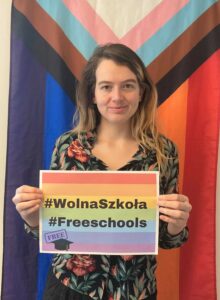 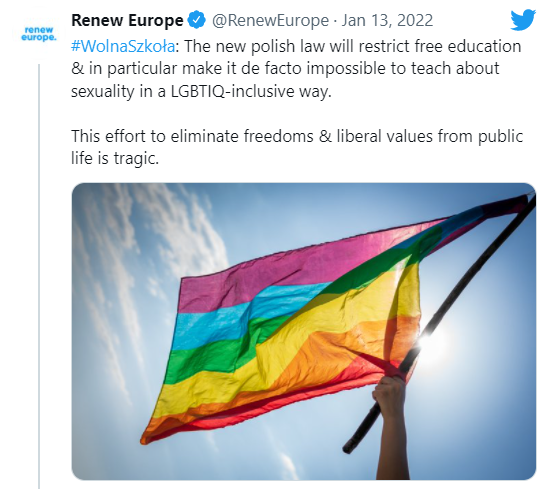 Lets talk about the right wing party that opposed the law. Konfederacja voted against the bill. Yes that’s right, 9 voted against two were absent. The party that had a high level member(Mentzen) saying their party platform was “We don’t want Jews, gays, abortion, taxes and the EU.” voted against this based bill. Why? Lets look at what Konfederacja MP and Ruch Narodowy leader Robert Winnicki had to say.

Zapaterism is striving for all kinds of religious symbols to disappear from the public sphere.

The mistake Winnicki is making is adhering to conservatism ideology. Honest conservatism will lose! Conservatives will refuse to do what the liberals are willing to, and slowly the liberals will win. Look at what is happening in the west! Conservatives are just liberals 10 years ago, saying they love their based trannies but drawing the line at men competing in women’s boxing. Conservativism must be abandoned. Who cares about what will happen if the liberals take power, nothing will prevent them from passing this law themselves if they wanted to. They certainly wont be restrained by libertarianism ideas of not using state or collective power. If this law didn’t pass, liberals wouldn’t restrain themselves from removing crosses from schools! Conservativism, especially “honest conservatism” must be abandoned. We are in an ideological war and our enemy doesn’t make themselves ineffective!

Winnicki is from the nationalist wing of Konfederacja. Artur Dziambor, from the libertarian Korwin wing opposed Lex Czarnek for centralizing the system and proposes an education voucher alternative were parents can choose from a variety of free market education solutions.

Grzegorz Braun, from the monarchist wing of Konfederacja, was excluded for refusing to wear a mask. He advocates making homosexuality illegal and imprisoning “professional sodomites”. 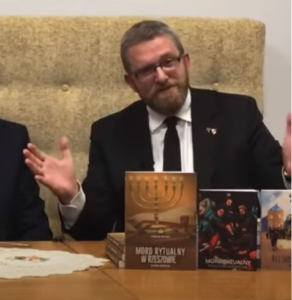 Braun holding a press conference about the books on jewish ritual murder he co-wrote. He’s also written an article about Auschwitz that cited David Cole.

Don’t judge too harshly that the nationalist wing of Konfederacja got this vote wrong. There are problems with them taking more right wing, and specifically conservative and libertarian, ideological positions than PiS sometimes. For example they also didn’t support the foreign media ownership ban law. They voted against a ban on kosher slaughter. It is disappointing.

However as proof of them being legit, consider that the Konfederacja Facebook page with almost 700,000 members was banned by meta just two weeks ago. It was partly do to a “hate speech” strike due to  this Winnicki tweet that was reposted on the Facebook page.

I hold Winnicki in high regard, and actually had dinner with him a few times. Very intelligent guy. You can read a great article about him on the ADL website. He’s one of the founders of the Warsaw march that’s held every Nov 11. I’d like to write that he is my favorite Konfederate but the competition is very stiff! 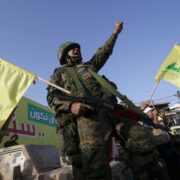 Aafia Siddiqui Did Nothing Wrong

Gay-Ops Abound in Ukraine After Russia launched its Special Military Operation to ...
Uncategorized