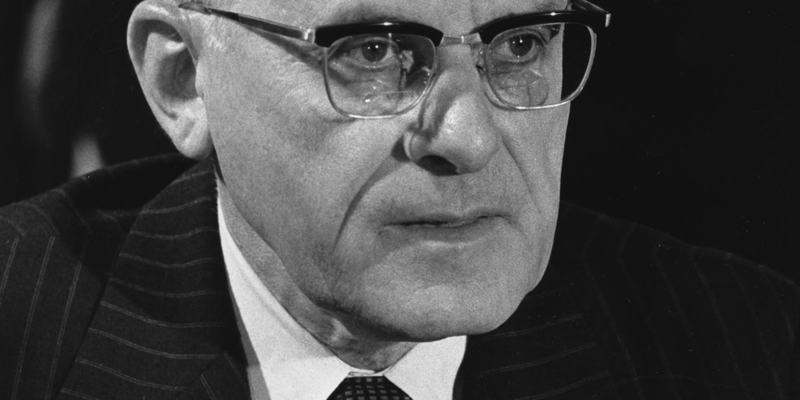 Catabolization is defined biologically as dismantling something complex like a protein into simpler units to provide an energy source, and is contrasted against assembling simpler substrates into complex molecules and structures via anabolism. John Michael Greer takes this general idea and applies it to economic and sociological processes. I’m not here to make a value judgment on whether Greer or by extension Joseph Tainter have fully comprehensive accounts of the rise and fall of “complex civilizations”, but the idea of catabolism is useful for explicating what happened to a historic social category in the United States and is currently happening to another one today. Think of the idea as just a tool of comprehension.

I’ve lived in the rural south for almost the entirety of my life, and dotting the landscape are these silent, overgrown cylindrical structures watching over empty fields like mute sentinels. They’re abandoned silos. Looking deeper, you can make out that these places are the ruins of old family farms. My own family on my mother’s side were small scale tobacco farmers from North Carolina, in the bygone days when you could still take your crop to market. 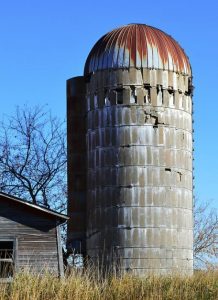 Most people today might not realize this, but at one point in time 84 % of the American labor force was engaged in agriculture. A similar percentage of Americans lived in rural areas. The civilizational archetype of the yeoman farmer was at one point the essential building block of the the United States. He might have gone through some degree of natural decline as America created cities and industry, but less than a century ago this was still a vital category, as it should be. Rural farming communities constitute something like a protein, they have a localized social complexity, they produce lots of offspring, and they can be used to build even more sophisticated structures in the nation. Civilization itself could be largely defined as built on the foundation of sustainable human agriculture.

At some point nations engaged in empire building, foreign wars, and various types of expansion inevitably turn to the farming class as a source of human capital. This is risky gambit long term, as farming is traditionally very labor intensive and long campaigns can lead to the loss of neglected fields. This is precisely what happened to Roman legionnaires. After participating in lengthy campaigns abroad, many returned to farms either ruined by lack of maintenance or foreign legions. Simultaneously the Roman economy increasingly concentrated farms into large estates administered by slave labor. Even more interestingly, the crops grown on these latifundia were selected based more on their economic and trade viability than on immediate usefulness, and Rome itself relied on grain imports from outlying provinces for basic foodstuffs. Rome essentially catabolized farmers for temporary gains in their capacity for conquest.

In America, we can see a very similar pattern, albeit augmented significantly by technology and the industrial age. 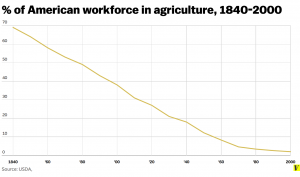 Farming as an occupation slowly depreciated as the primary occupation since the historical high labor force participation high of 1810. As would be expected from the Roman example, there’s a dip around World War 1, followed by a resumption of farming as soldiers returning from the front went back into the fields. In World War 2, we get a very different outcome. After the number of farms peaked around 1935, the farm boys went to war or heavy industry, and their women took on factory roles. After the war ended they didn’t all go back to farming. They sold their fields and stayed in their new working class roles. Farms were rapidly consolidated into the same sort of megafarm latifundia seen in the late Roman Republic. From the 1940s to the 1980s, small scale yeoman style family farming in the United States was totally obliterated. There were, as with the Romans, economies of scale and big elite interests on one side, and additionally on the other side, disastrous domestic policies that essentially gutted these small farms with debt. America consciously decided “market oriented farm policy” was more important than the farmers themselves, their lifestyles, and their ability to produce plenty of native-born US citizens. “Get big or get out.” was an intentional top-down strategy driven by pure greed and avarice that resulted in a massive consolidation of agriculture into mega-farms. Small farms took on easy credit to expand, and then they were decimated by a grain embargo against the Soviet Union which should be hauntingly familiar to anyone paying 4 dollars a gallon for gasoline right now. The little guys got wrecked, farm size went up, and a combination of mechanization and cheap foreign labor replaced the domestic workforce.

Today less than 2 % of the American labor force works directly on a farm. Farms are run by people who are on average over the age of 57. Smaller scale family farming is itself no longer a viable occupation to the point that if you have such a farm, you are definitely getting income via a secondary source. Despite being the building block of all modern civilizations, the simple pastoral lifestyle is now an honest to God luxury pursuit for people who do it as a glorified hobby.

I want to emphasize that while one would naturally expect some degree of natural decline in smaller scale family farming of the sort frequently associated with “subsistence”, what transpired in America was not merely an emergent happenstance development. There were intentional, conscious, deliberate policies by people like Earl Butz based on a neoliberal ideology that lusted for short-term profits over long-term stability. Small-minded avaricious, greedy bureaucrats with no vision or appetite for anything faintly resembling a sustainable future gutted an entire way of life in the name of the almighty dollar. All too often these outcomes are portrayed as inevitable when they are nothing of the sort. Bad, short-sighted policy in the name of greed produces these structural changes, and they can absolutely be undone or reversed. Farmers in America were catabolized as fuel for other endeavors and their localized complexity was broken down for quick profits, much in the same way as the human body might turn protein into glucose.

Join me for Part 2 on a discussion of what happened to the American working class. 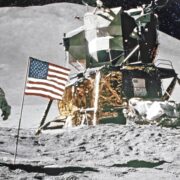 America Landed on the Moon, Snowflakes.

Chamath Palihapitiya, alleged Canadian, has a reputation for winning bets in the ...