When the left-leaning and non-White residents of New York City aren’t busy stealing, shooting dope, violently assaulting each other, or paying exorbitant prices for household goods, they’re scurrying online in search of the next White man to string up in the court of jewish moral outrage! Meet Griffin Green a.k.a “Bodega Bro,” the latest young White man to have his entire life turned upside down by spiteful creatures online over a simple, harmless video.

Bodega bro got fired for educating us what a food desert is. We should boycott Outreach for their firing. Uno reverse cancel thempic.twitter.com/xRfbLNtxp5

“Okay, so I just moved to New York, and I’m trying to go grocery shopping, so I typed in, like, grocery stores in my apple maps, and like everyone I go to, they’re like this shit…Like bro, that’s not a grocery store.”

Grif, who recently relocated to New York from Ohio to work at a sales marketing startup called Outreach, was abruptly terminated from his position after voicing his concerns over his new neighborhood of Mott’s Haven, Bronx. The crime?  This young, upstanding White man took to TikTok to complain about grocery stores, noting that instead of common food chains like Kroger or Whole Foods, Grif was met only with a dozen or more low-quality bodega joints in his approximate vicinity.

His termination, which came after just one day of employment at the company, was confirmed by Outreach via Twitter after an anonymous leftist with an anime profile picture (aka transsexual) “blew the whistle” on Grif’s harmless Tiktok post. Many quickly followed suit, citing racism, bigotry, homophobia, and labeling him as a “disruptor” for the “marginalized community” around him. Outreach’s H.R Department rapidly caved to the outrageous demands of an ideologically corrupted mass of traitors and ne’er-do-wells, and shamelessly threw innocent Grif, to the dilating wolves. 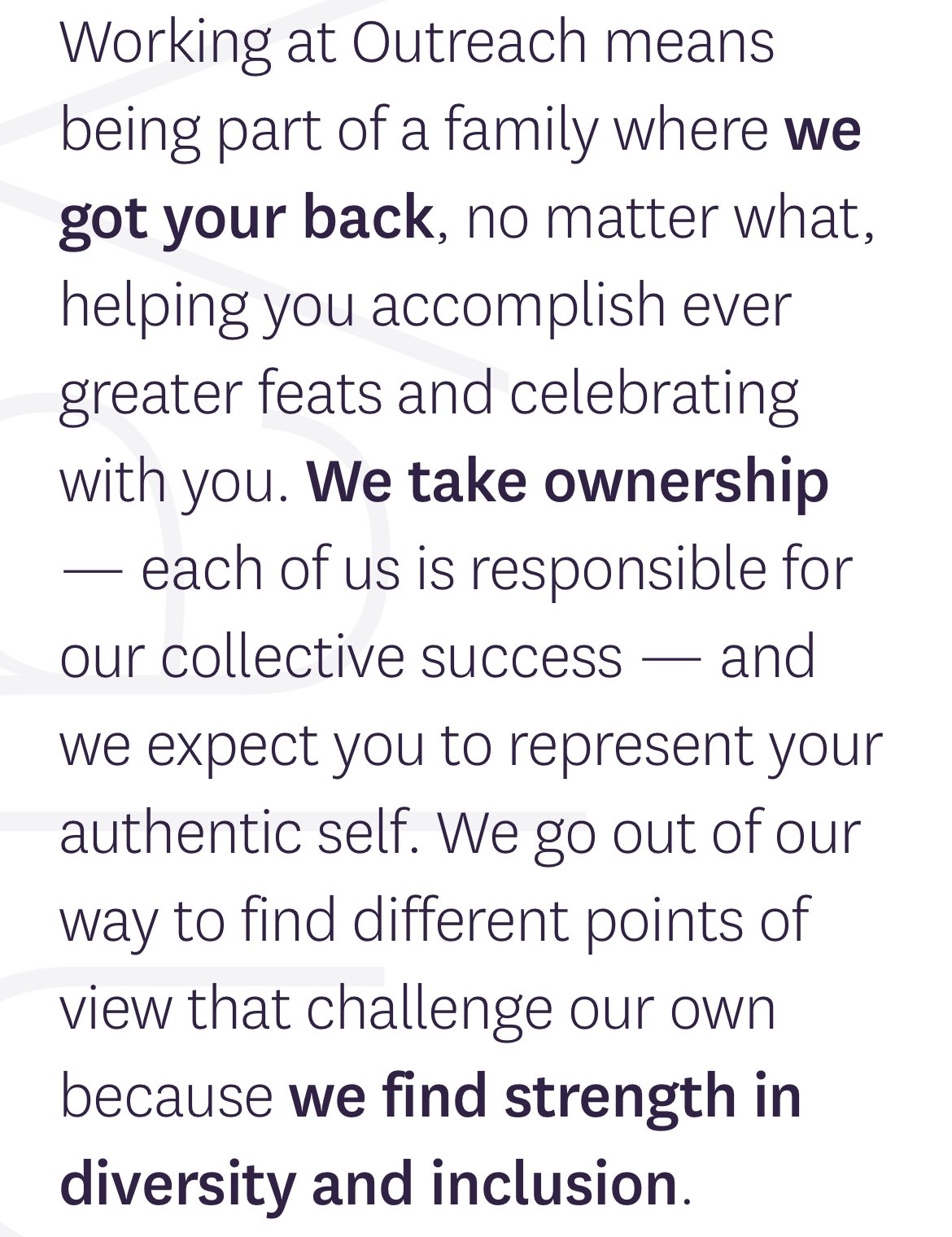 One of the mission statements for the company “Outreach,” which fired Grif for being White-with-opinion. 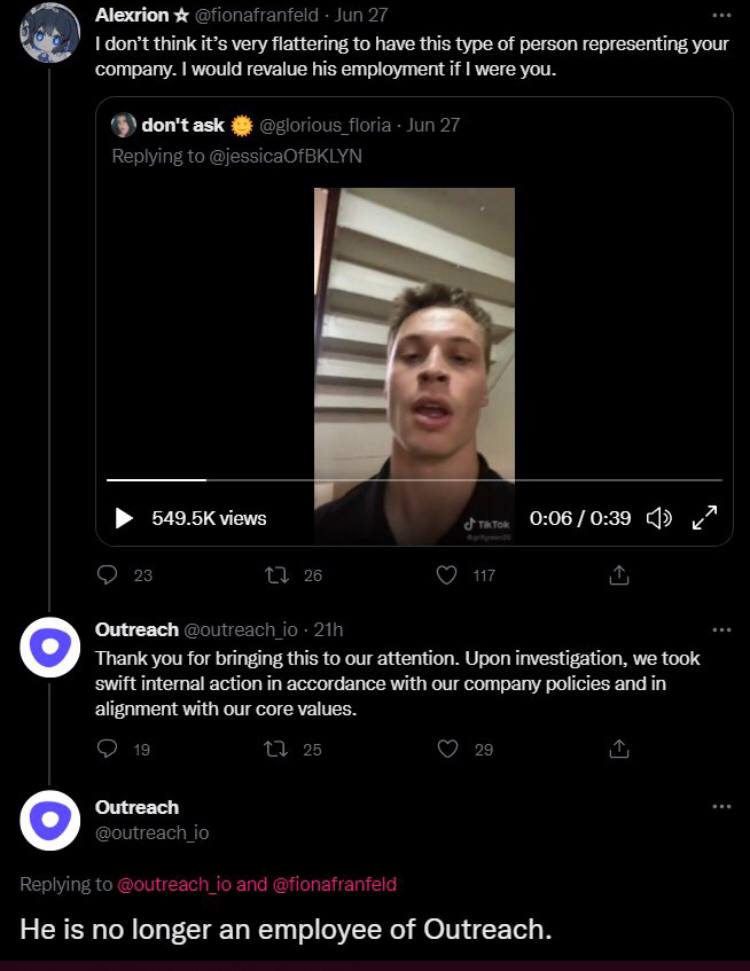 This is all that it takes for a jewish tranny on Twitter to get someone fired. The account is private.

The aftermath of this shocking display of anti-White hatred has since left “black Twitter” in a state of—what Spike Lee once coined—”coonery and buffoonery.” Everyone else, however, is left scratching their heads. 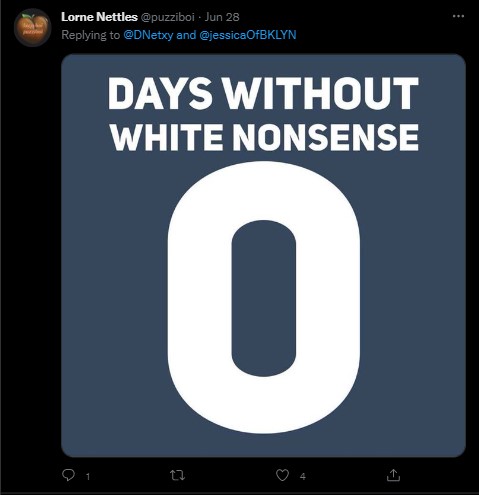 If you’ve never been to a bodega before, picture a gas station convenience store filled with pre-packaged foods like combos and loose Gatorades, but the isles are too tight to navigate, and there are shelves of dubiously acquired products that are splayed out from floor to ceiling. Racks and racks of knock-off snap-back hats and black and mild cigars rest behind the bulletproof check-out counter, and the clientele that shuffles in and out are looking for loose cigarettes, coronas, bacon, egg, and cheese sandwiches, or simply want to launder their SNAP card balance into cold hard cash. The Bodega which @Griffgreen20 entered on a now-viral TikTok video. Most bodegas are actually much worse than this one.

Did Grif mention any of these stark realities in his video? No. What Grif actually did to earn his unwarranted termination at the hands of a j-left “woke” HR department was exist as a White person who would dare to record non-whites in anything but a congratulatory, self-abasing manner.

While the power of “doxxing” has been substantially reduced in the previous years as a means to silence individuals who the system might deem “problematic,” it can still be used effectively against those who work in fields that are tightly controlled by the jewish, neo-liberal order. Grif’s job in sales is one such career.

Committing the high crime of being “insensitive” (i.e White with an opinion), Grif inadvertently triggered outrage amongst leftist transexuals, angry mulattos, and other gutter scum from the Bronx to start a mass flag-and-report campaign, one that would begin the termination of Grif, and (hopefully) kickstart his new life as an avowed member of the dissident right.

Take a look at this Twitter “clap back” by a jewish twink, who has the audacity to jew-splain the idea of “coming into someone’s home and disrespecting it.” 🤔 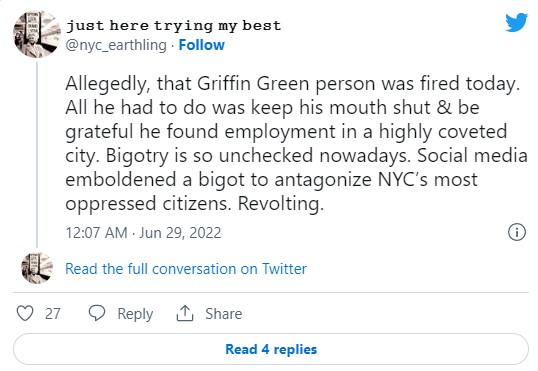 An example of leftist rage

Funnily enough, one would assume that highlighting a lack of proper grocery stores that offer food beyond Arizona iced tea and bags of resold funyuns would be an acceptable position in the eyes of urbanite leftists. However, tackling issues like growing food deserts are a thing of the past, and the ravenous demands of lefties and black Twitter are sated only by the prospect of White ridicule and blood. 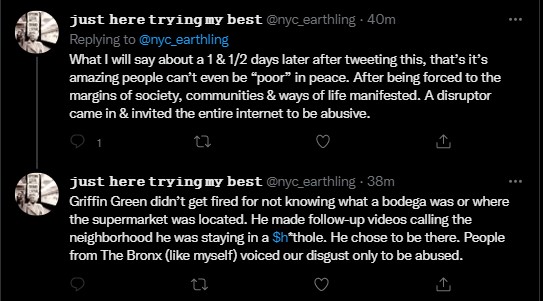 If a non-White complained about a lack of grocery stores, three would be erected overnight. Because Grif, a White man, complained about it, he’s fired, ostracized, and labeled a “disruptor.”

When the user blowing the whistle is a transsexual with the surname (((Franfeld))), the follower count doesn’t matter. Outreach bent the knee.

But who is Grifgreen20? Before all of his social media went private, and understandably so, the 22-year-old wrongfully terminated sales development representative lived the good life as a linebacker for Denison University, a top liberal arts college in Ohio. After scoring his job with Outreach, he was relocated to New York to work in Manhattan, but was staying in Mott’s Haven temporarily. Having your whole life uplifted, just to get it torn asunder in an anti-White online attack will almost certainly stick in his craw for the rest of his life, and teach him a valuable lesson of racial unity taking precedence over monetary gain.

In the meantime, you can give a call to Outreach’s Human Resources Department and voice your concerns about the firing of an innocent White man at the behest of online freaks. 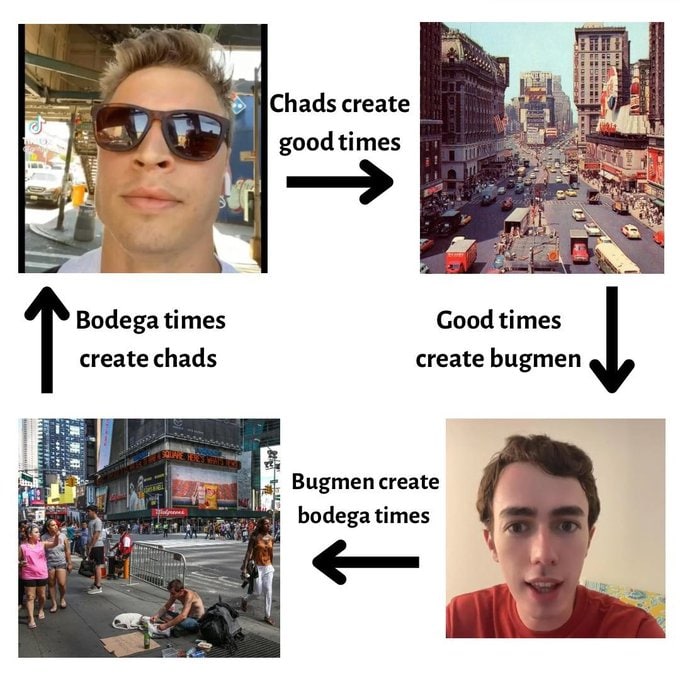 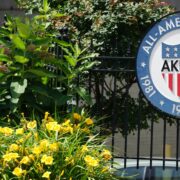 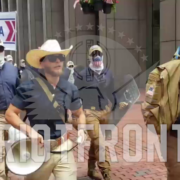