UPDATE 7/4/22: Footage has been released of BLM setting fire to dumpster barricades, setting off fireworks, and tearing up the streets of Akron, Ohio as they continue to protest the justified shooting of criminal black Jayland Walker. Stay tuned for more updates.

Saturday 7/3/22: On June 27th, two days after the National Justice Party protested the racially motivated killing of Ethan Liming in Akron, Ohio, Jayland Walker, a twenty-five-year-old black became the latest to die in a growing list of justified police shootings in the United States. Since then, bodycam footage of the incident was released to the public, which shows in crisp quality as Jayland refuses to stop his car which led eight Akron Police Department officers on a high-speed chase across the Rubber City.

At the end of Jayland’s violent, four-minute-long Grand Theft Auto LARP—which included shooting at pursuing officers from out of the car window—police eventually opened fire, justifiably killing Jayland and preventing further injury to others and damage to public property. The Police had to deploy a total of 90 rounds to restore public order. A firearm was found in Jayland’s possession, as well as a ski mask firmly covering his face despite it being late June. 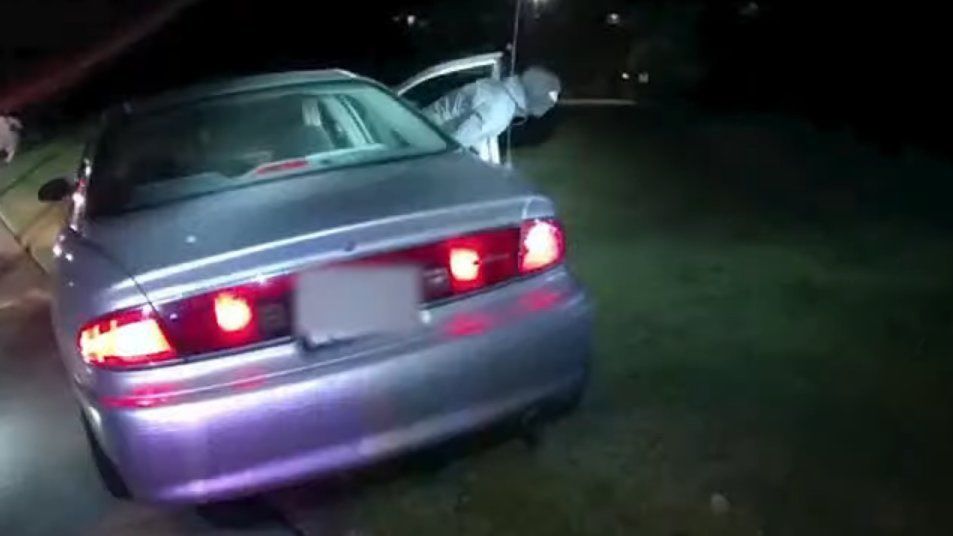 Jayland Walker fled his vehicle after a high-speed chase with Police that resulted in an exchange of gunfire. He can clearly be seen wearing a ski mask in June.

In an effort to coordinate a unified media narrative, Akron Police Chief Steve Mylett spoke on Sunday, June 3rd to the press before releasing bodycam footage of the incident to the public. In a rambling diatribe of politically correct weasel words, the pig-in-chief sweat bullets in front of a crowd of journalists and ostensibly threw his own officers under the bus before the investigation was even over. Of the eight police officers involved in the self-defense killing of Jayland, seven were White. All eight are now on administrative leave, which is typical for police agencies after deploying lethal force.

While at first, news reports were quick to indicate that Jayland was unarmed during the incident, and therefore innocent of the shooting, they changed their lying tunes the moment that narrative became indefensible. Pictures of Jayland’s weapon used in the fatal shootout with police have since been released, forcing the media to switch from an “unarmed” talking point to an “outmanned and outgunned” defense. This dangerous play by news media implies that criminal blacks are only allowed to be stopped in a fair gunfight with police is a chilling admission of anti-White ideology. 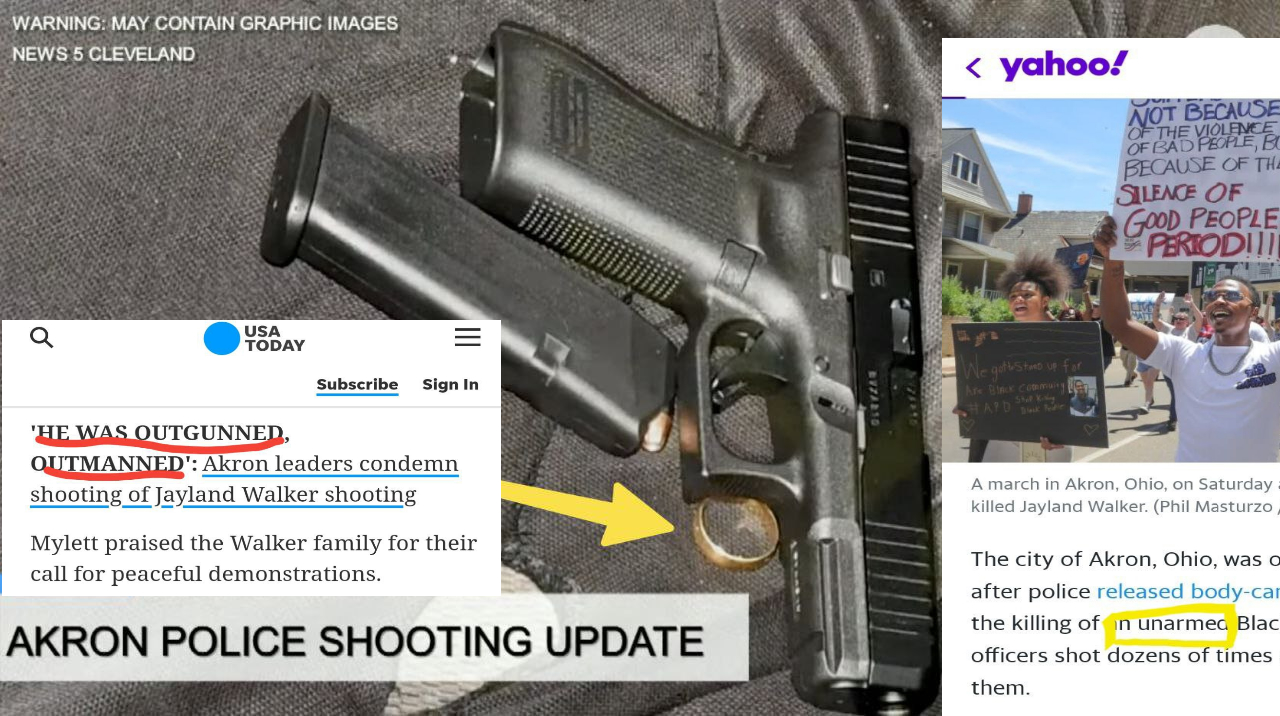 Members of the black community are now demanding the officers be terminated and charged with murder (ala Derek Chauvin) in an effort to increase “accountability,” but how the media-run-state can justify the condemnation of a whopping eight police officers while simultaneously keeping Whites bought into their blatantly unfair system is anyone’s guess. Akron, Ohio has now become a city of two vastly different killings with two vastly different outcomes, with blacks allowed to pursue “justice” for any perceived racial grievance they’d like, and Whites left to silently weep over their own forgotten dead.

Akron Mayor Dan Horrigan also lent a hand in the spin campaign, canceling the city’s fourth of July weekend celebrations and denying the dwindling White population a much-needed reprieve from the multicultural hellscape that has become their hometown.

Ultimately, Steve Mylett and Dan Horrigan, alongside national news media, helped cement a system narrative that favors the obviously criminal Jayland Walker over eight uniformed officers, but more importantly, they paved the way for a slew of black demonstrations to take place and overshadow the efforts of pro-White activists championing the far more important story of Ethan Liming.

Black outrage in the face of criminals getting their due justice is nothing new, however, and unlike the lynching of Ethan, Jayland’s shooting is already receiving national attention. For the past three days, the criminal organization Black Lives Matter, alongside the Akron branch of the NAACP, has staged a “community peace rally” in remembrance of Walker, and things have only begun to escalate since its rather pathetic start on July 1st. 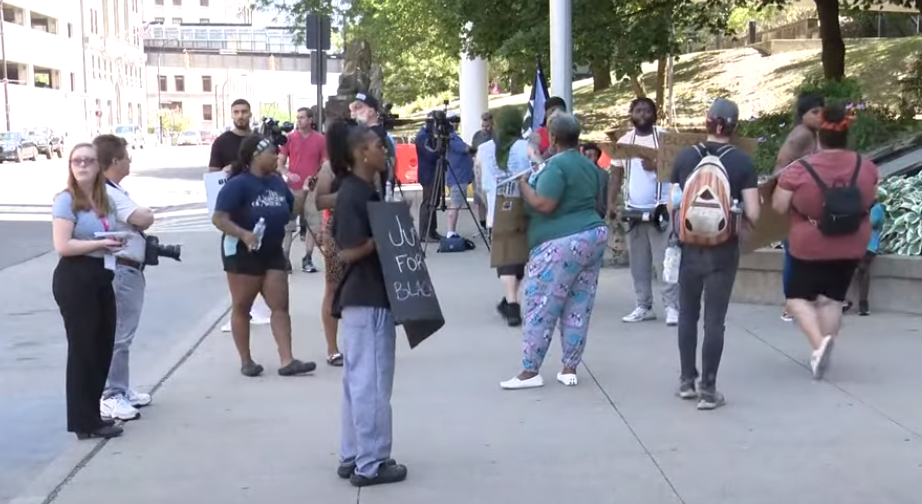 On Sunday, an agitated mass of astroturfed black protestors reached a veritable boil, as hundreds of people gathered downtown holding freshly printed NAACP signs showcasing the hashtag #WeAreDoneDying. The crowd then began to move past the Stubbs Justice Center, where just one week prior the National Justice Party had spoken the truth about Ethan Liming. Black crowds chanted, mocked the armed police presence, and made demands of society that were entirely outrageous.

“Only if they treated us like humans, we wouldn’t have this,” she said. “Only if the police had understood there was one person in that car, only if they valued the life of an African American man.”

Heavily armed members of the Black Panther Party marched under the snapping fabric of watermelon-colored flags while they held weapons that could easily land a White man dozens of years behind bars if they were caught with one. They blocked the streets, and confronted elements of the Summit County Sheriff’s SWAT team. As a response, police forces activated and repurposed the city’s snow plows to block access to certain streets and corral the paramilitaries and thugs into curated paths inside Akron.

While no weapons have been discharged so far, the tense situation resulted in insults being flung toward the majority White cops and leaving many to wonder when the heavily armed warriors of the neo-liberal system would finally take a knee in supplication to a black mob. Members of the Summit County Sherrif SWAT Team stand by in preparation to kneel at a moment’s notice.

Some were armed with ​handguns, semi-automatic rifles and at least one crossbow.

Among those that marched and spoke on Sunday were “black leaders” such as Judi Hill of the Akron NAACP alongside “black lawmakers.” Various leftists and societal bottomfeeders looking to capitalize on the social degradation of America also showed support if only to advance their own personal social media profiles.

One such entrepreneurial do-nothing is Russell Tee, a “prominent Tik-Toker” who came to show his support while simultaneously bathing in the validation of his ethnic counterparts. “At this point it’s state-sanctioned terrorism,” Tee said. “This specifically was an assassination — 90 shots in six seconds, 60 of them hit him. He never had a chance to live.” 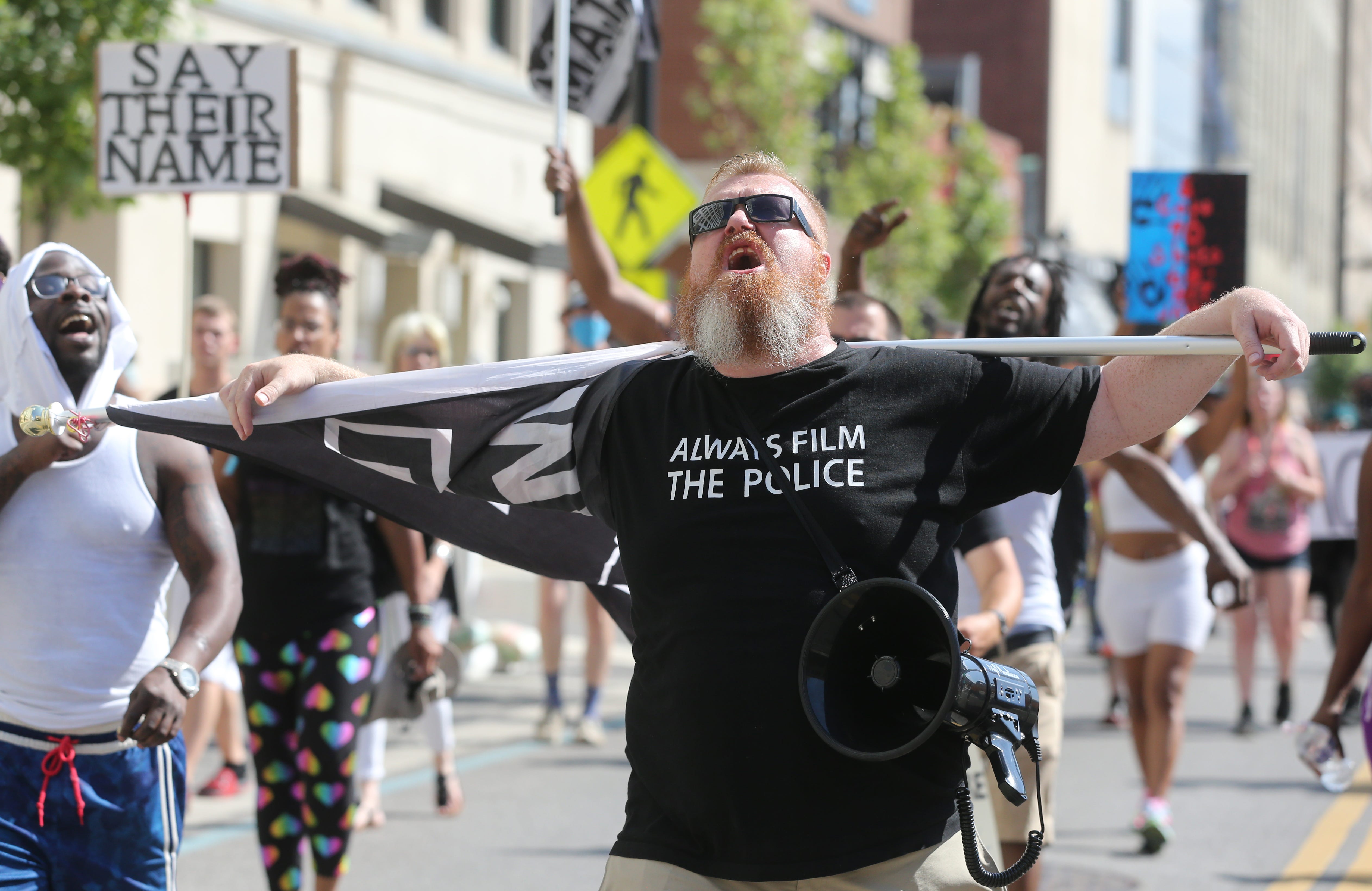 Mentally ill status-seeking TikTok activist Russel Tee (@jolly_ginger) marched with BLM on Sunday in search for buttpats and thank you-s from a race of people that would kill him over a fast-food order.

While the insane double standard on display at a place like Akron, Ohio is frustrating to see, it’s not entirely unexpected. With the current rise of pro-White street activism from organizations such as Patriot Front and the National Justice Party taking the nation by storm, the system can only respond with deafening silence in an attempt to “memory-hole” the situation, and by flooding headlines with overblown and clearly astroturfed distractions.

Jayland Walker may just be another dead black, but for an increasingly nervous power structure, his corpse serves as a perfect pawn in the great game of racial politics. Will Ethan Liming finally get the justice he and his family deserve? Will the National Justice Party return to Akron and once again demand Police Chief Steve Mylett take a knee for White people? Stay tuned for more updates.

The IRL N Tower: The Story Behind A Black Housing Project That Helped Kill A City 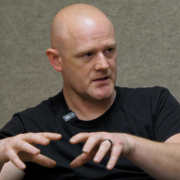