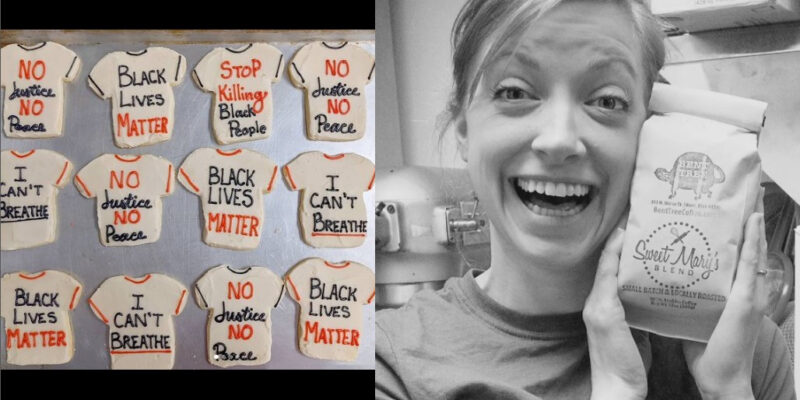 America seems to have a fascination with mixing mainstream political takes and sugary treats, and the latest instance of this strange batch of social confectionary comes from Akron, Ohio, where an anti-Fascist, BLM-supporting, woman-owned “micro-bakery” released a new line of cookies. The problem? The message that these particular cookies displayed was the words “Fuck the police.” 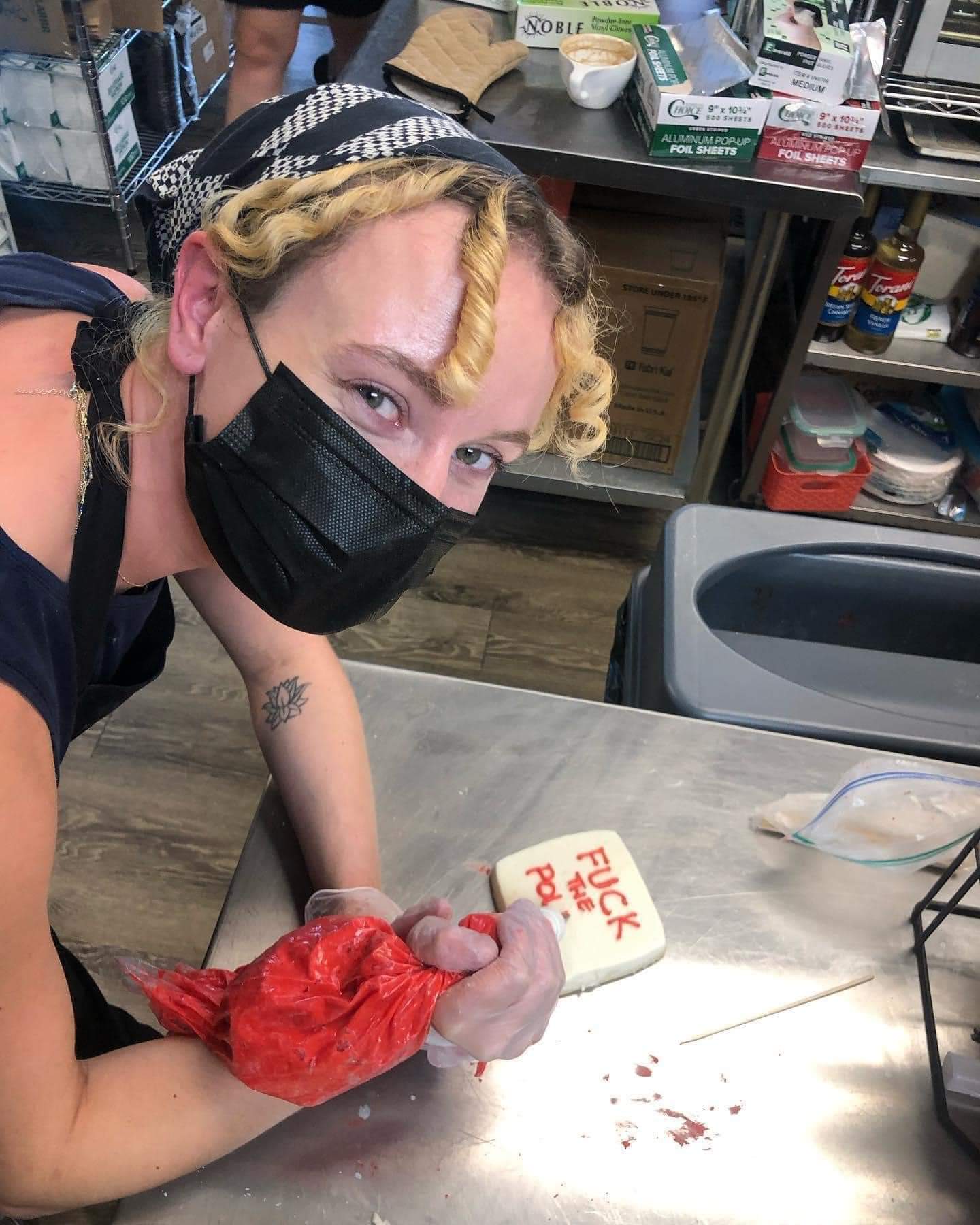 An unidentified anti-fascist employee at “Sweet Mary’s Bakery” can be seen smiling behind a black covid mask while writing the words “Fuck the Police” in buttercream. You can smell the patchouli and CBD oil from here.

Sweet Mary’s Bakery, a self-described “woman-owned” business that “will always fight for what (we) believe in, and (we) might even put it on a cookie” kicked off a storm on social media after a picture was circulated depicting a female employee gleefully etching the anti-White screed onto a flat, square-shaped cookie.

The establishment rests only a few blocks from where the pro-White National Justice Party staged a protest in the wake of the anti-White lynching of Akron teenager Ethan Liming. At the writing of this article, it is unclear if Sweet Mary’s ever made a cookie calling for justice for the murdered White youth, or if the racially biased crime was too inconvenient a subject for the leftist bakery to address.

The sick product was crafted in an attempt to signal support for the criminal miscreant Jayland Walker and the terrorist group Black Lives Matter, who recently tore downtown Akron apart during a weeks-long protest that included the heavily armed New Black Panther Party and other anti-White organizations. In the past, Sweet Mary’s called for the complete abolishment of the Akron Police Department and joined a slew of other leftist groups which called for protestors to join in on the mayhem during the Walker riots. 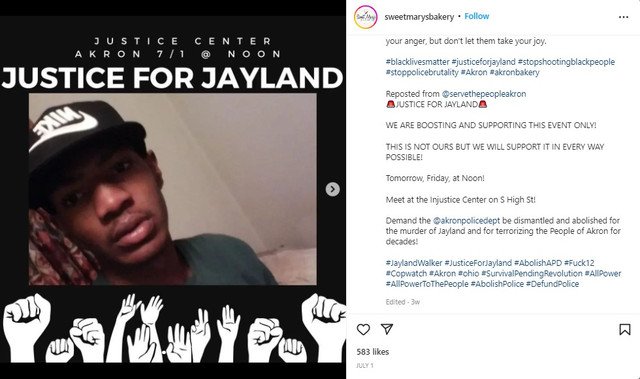 Taken from Sweet Mary’s Instagram page, the radical leftist bakery openly calls for violence in Downtown Akron during the Jayland Walker protests and demands the abolishment of Akron, PD, a move which would only place the White community in further danger.

While the latest move is obviously a flagrant spit in the face of the remaining White citizens of Akron, Ohio, the business has long been a hotbed of inflammatory, leftist rhetoric which uses their baked goods as a platform to champion anti-White causes. In fact, anti-police propaganda merely joins a laundry list of other offensive anti-White messages displayed on baked goods at Sweet Mary’s, and finding cookies and cakes plastered with slogans supporting widespread gun control, homosexual rights, pro-abortion sentiment, and little quips mocking supreme court justices are not uncommon sights. They even admit this is a part of their business strategy.

Because we are passionate about what we do, we put our hearts into our food and into this business. Sometimes that means our hearts interfere with traditionally accepted business practices and we feel the need to stand up for our values and make a statement regarding current events. 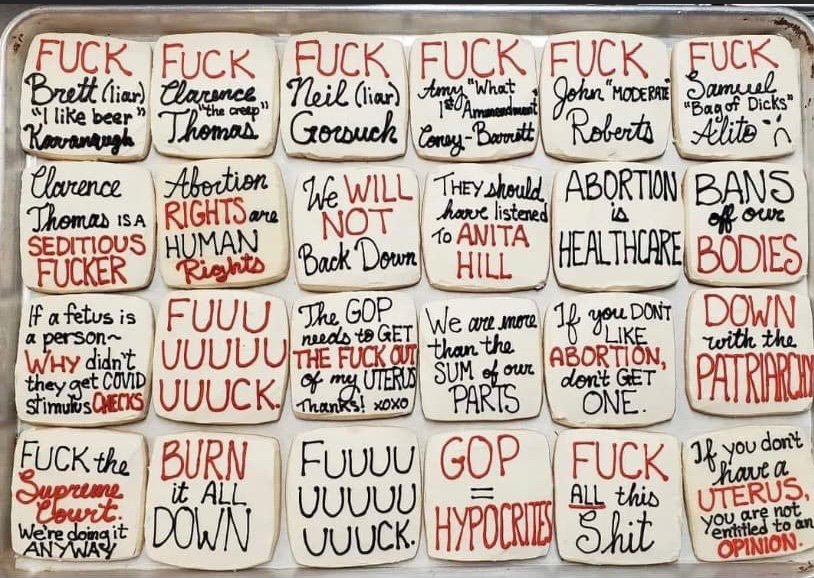 If you’re in the market for cookies that ghoulishly support the murder of babies and childish insults hurled at mainstream political opposition, then Sweet Mary’s has you covered.

While the photo originally made rounds on Facebook, the negative backlash from White citizens of Akron was so tremendous, that the bakery was forced to retreat and shutter its Facebook page entirely citing personal and vitriolic comments. Republican politicians were just some of the voices to come out on Facebook against the cooky cookie, but in typical America First fashion, they made sure to send their least White candidate to come out in front of the issue. Libs owned!

But the backlash didn’t end there! With no other way to voice their opinions on Sweet Mary’s deranged, anti-law and order stance, concerned citizens from across the country took to the business review site, Yelp, where dozens of negative one-star reviews were placed. In the aftermath of Sweet Mary’s latest attempt at virtue signaling toward an ever-shrinking leftist customer base, the bakery’s profile was justly reduced to a paltry two-and-a-half star rating. Some of those reviews can be seen in the album below.

With no other place to go on social media, Sweet Mary’s made the retreat to safe waters on Instagram, where comments to pictures of their baked goods and extreme leftist vitriol are highly controlled. It’s from this curated soapbox where the company has long praised the tenents of anti-racism, peddled homosexual propaganda, cried alligator tears for George Floyd, celebrates system-mandated holidays like Juneteenth, fundraised for gun control in America while simultaneously fundraising for the jewish hot war in Ukraine, and shares just about every fake, incoherent, neoliberal cause quicker than a cat lady can devour a pint of Ben and Jerry’s.

Strangely enough, Sweet Mary’s, in their never-ending crusade to keep up leftist appearances, even supports the rights of Palestinians in the Middle East! Curious, I wonder what the predominantly jewish donors to causes like Black Lives Matter would have to say about that? 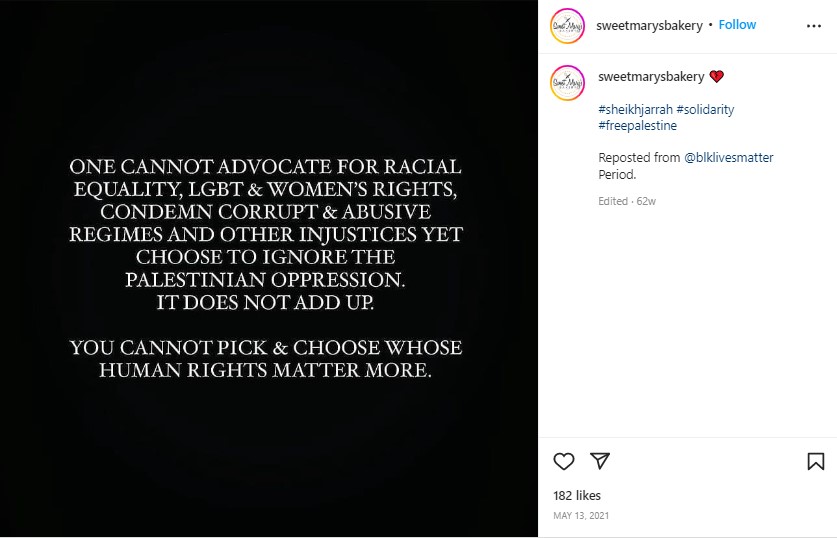 Sweet Mary’s Bakery’s shotgun approach to supporting liberal causes means we get things like “free Palestine” right next to pro-Jewish sentiment on Instagram. 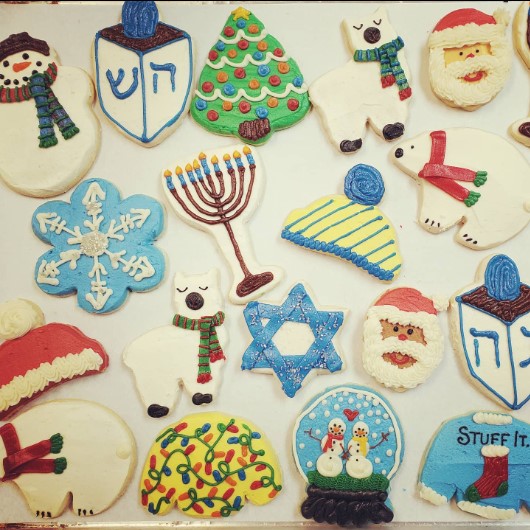 Jewish-themed cookies offered at Sweet Mary’s Bakery. The problem with supporting every liberal cause under the sun is that you’re bound to make some hefty contradictions. Supporting Palestine and Israel at the same time is a political stance that is bound to backfire.

While Mary Hospodarsky, owner of Sweet Mary’s refused to comment on the offensive “fuck the police” cookie, an Instagram post authored by an anonymous employee addressed the backlash they received from normal people in a wall text of epic proportions. Inside this cope-filled tome of obfuscations and leftist delusion, they also make sure to attack and demonize so-called “white supremacists” who they believe have victimized them with one-star reviews.

Thank you for showing up, not backing down, and showing the rest of the world that in Akron Ohio, we don’t take crap from racists, white supremacists, or the willfully ignorant.

The United States in 2022 is fully gripped in a state of ideological civil war, and bakeries, it seems, will always remain as some of its hottest battlegrounds. Time will only tell if Sweet Mary’s will cease its radical anti-White propaganda drives in the face of overwhelming criticism, or double down on its racially insensitive views. While America is still firmly in control by the people who propagate such dangerous narratives which target the lives and values of the majority, the effect those narratives have appears to be suffering from diminishing returns.

If the online backlash that an anti-fascist bakery like this receives on social media is any indicator, then we can take away one key lesson: that normal, everyday White people are fed up and fully aware of what’s going on in this country. The anti-White slogans, messaging, narratives, protests, and virtue signaling that trickles down from the highest reaches of our once trusted institutions are failing to do what they’re intended to do in the first place, that is, intimidate White people into a state of complacency. 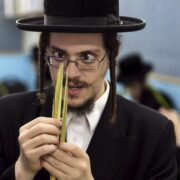